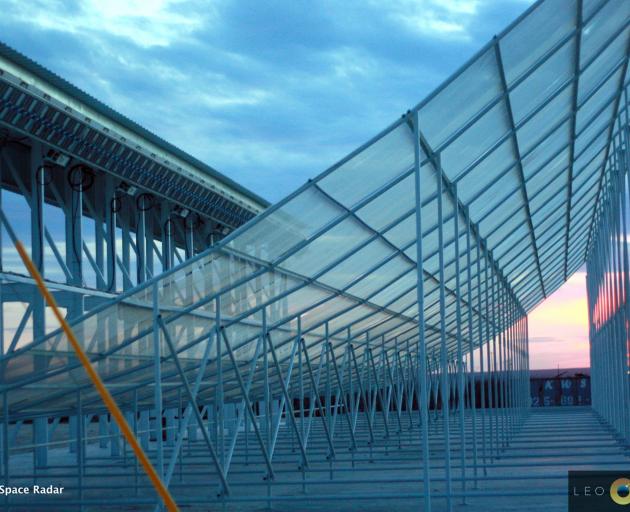 A LeoLabs’ radar in Texas. The Central Otago radar being constructed will be similar to, but not exactly the same as, the Texas facility. PHOTO: LEOLABS
A Central Otago space radar is on track to start cleaning up space soon, but the location of the facility is not known - yet.

California-based LeoLabs announced the project last year and construction of the facility began earlier this year.

A LeoLabs spokeswoman said the international space tracking facility would help "clean up space" while sourcing cutting-edge data for a range of space-based technologies.

The space radar would detect space debris as small as 2cm in diameter in low Earth orbit (Leo).

It will be one of only three operating in the world, in what will eventually become a larger international network.

The location of the facility was not disclosed last year but the spokeswoman confirmed yesterday it was in the Naseby district.

However, the exact location would not be disclosed until the facility was completed, to allow construction to continue uninterrupted and for health and safety reasons, she said.

The spokeswoman said "all's going well on site" and construction was on target. The facility was expected to be completed within several months, she said.

The space radar would cost more than a million dollars, the spokeswoman confirmed last year.

LeoLabs' other two space radars measured space debris down to a diameter of 10cm, so the new 2cm technology would be integral in the fight to "clean up space", she said.

But "against this backdrop" was the risk to satellites and astronauts posed by space debris, "especially from the estimated 250,000 dangerous objects which are untracked today", Mr Ceperley said.

LeoLabs describes itself as the leading commercial provider of Leo mapping and space situational awareness (SSA) services. Its core technology includes a global phased-array radar network that tracks debris and satellites in Leo, and its services include collision prevention, risk assessment, constellation monitoring and commercial SSA.

It also has an agreement with New Zealand's Ministry of Business, Innovation and Employment to promote the creation of applications and services that enhance New Zealand's contribution to the space industry.