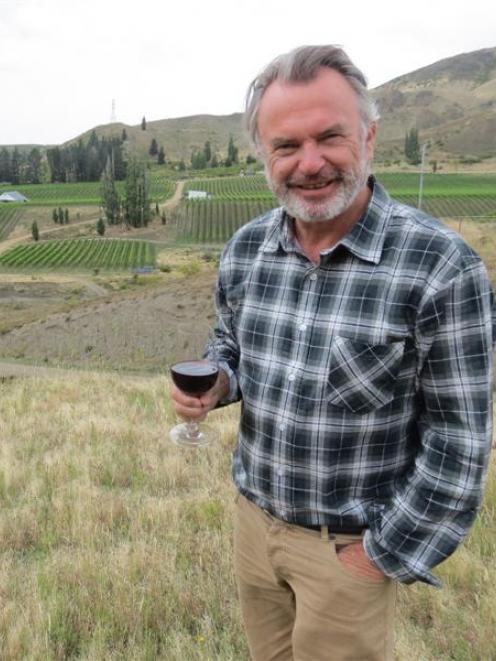 Two Paddocks founder and actor Sam Neill, of Queenstown, yesterday toasts his winery's acquisition of a fourth vineyard in Central Otago, the 6ha Desert Heart in Bannockburn, seen behind him. Photo by James Beech.
Actor Sam Neill says his winery's fourth vineyard acquisition demonstrates ''faith and confidence'' in Central Otago and its pinot noir for the global market.

Two Paddocks announced this week it had become the only Central Otago winery with a foothold in all three Central Otago wine-producing sub-regions, owning vineyards in Gibbston, the Alexandra basin and now the Cromwell basin.

Neill said a sum of money which was ''considerable, but both vendors and purchasers think it fair'' had bought the established 6ha Desert Heart Vineyard, plus woolshed and house, at the end of Felton Rd, Bannockburn, last week.

Neill said at the site of his new property yesterday there were few areas in Central Otago, or the world, where pinot noir grapes could be grown successfully and Bannockburn was possibly the epicentre of the Central Otago wine industry.

Differences between the three sub-regions were becoming apparent ''and for that reason I've been looking quietly around Bannockburn to find the right established vineyard for Two Paddocks''.

Fruit from the new acquisition would be evaluated in about two months to become a component in both entry and flagship brands of Two Paddocks' ''fairly restrained, possibly classical pinots and we don't want to stray too far from that, but some lively addition to the main palate may be just the thing'', Neill said.

The top tier is the occasionally produced single-vineyard pinot ''The Last Chance''.

The new vineyard would be renamed in memory of Neill's father, who was a wine merchant and a soldier. The name would be announced after it was registered.

The vineyard would increase Two Paddocks' output by a third to about 7000 cases a year, Neill said.

''Our own brand is becoming increasingly recognised around the world and, quite frankly, at this point we can't make enough. Our distributors are always asking for more allocation.''

Desert Heart had been tended with ''immense dedication and attention'' by Denny Downie and Jane Gill since 1999, he said. They would retain the Desert Heart brand and continue in wine retail while staying in the area.

Asked about his interest in vineyards, Neill said his family had been involved in the wine business for 150 years in Otago.

''I can't think of anything nicer than to grow things you really like to eat or drink and almost everything about it is so much different from my other job,'' he said.

''I've loved pinot since I first discovered it in 1979. I was in a restaurant with James Mason and his wife and he opened a bottle of Burgundy. It was like a moment on the road to Damascus for me.''

Sam Neill, DCNZM, OBE, is a New Zealand actor, writer, director and producer whose acting credits include The Hunt for Red October, The Piano, Event Horizon, The Dish, two Jurassic Park films, Perfect Strangers, The Tudors, Alcatraz and Harry over a 40-year career.

He finished Australian supernatural thriller Backtrack with Adrien Brody on Friday and one of his projects this year is filming the second series of the BBC's historic crime drama Peaky Blinders, in which he plays a psychotic police inspector. Neill (66) established Two Paddocks in Gibbston in 1993 and the first vintage was in 1997. The 3ha Alex Paddocks, above the Clutha River near Alexandra, was acquired in 1998. The 53ha farm Redbank in the Earnscleugh Valley was acquired in 2000 and became the main vineyard and business headquarters.