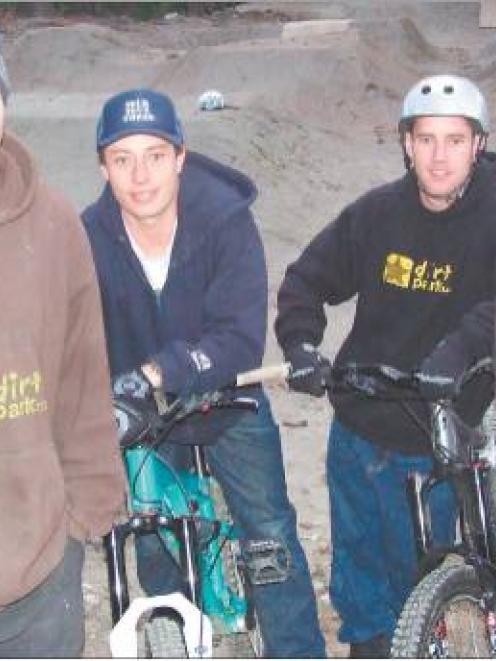 Naming themselves after the first three digits of telephone numbers in the Upper Clutha, the Four Four Three boys have established themselves as bike track ‘‘design and build'' extraordinaires, having spent the last two months clearing and shaping an area of land in the Lismore Reserve.

The resulting council-approved Lismore Bike Park is described by its creators as a freeride mountain biking jump park, surrounded by a cross-country loop track.

Four Four Three is made up of brothers Julian and Jamie Thompson, plus Andrew Corish and Dan Haydon.

When not building tracks, the Thompson brothers run a gibstopping business in town and, over the summer, design and build the tracks at Dirt Park NZ with Mr Haydon, a builder.

Mr Corish spends his time away from the track in the company of bikes, working at a Wanaka bike store.

All have considerable biking experience and have been heavily involved in maintaining the bike tracks in Wanaka's Sticky Forest.

Julian Thompson said Lake Wanaka Cycling Inc (LWC) had formulated the idea for the bike park and had been working on the project ‘‘behind the scenes'' for about two and a-half years, liaising with the Queenstown Lakes District Council and gathering funds.

Under the direction of LWC - of which they are members - the members of Four Four Three had taken leave from their usual jobs and started work on the bike park in April.

While the men earned ‘‘a bit of a wage'' for their efforts, it was ‘‘more the love of the sport rather than the money'' that drove them, Julian Thompson said.

After much hard slog, the bike park is now basically ready to go, aside from some finishing touches, such as plantings and signage. The dirt also needs to settle to become hard enough to ride on.

LWC president Willem Groenen said there had already been plenty of interest from young bikers.

‘‘We've kind of been feeling the pressure to open it, with lots of grommies in town already riding it.''

Although there were days when the track was rideable, the berms and jumps were ‘‘still settling down'', and if people used the park when it was soft, it could get damaged.

LWC was hoping for drier weather later in July to give the public some riding time after the school holidays, but an event would be held at the end of September to mark the park's official opening.

The new facility featured something for everyone, Four Four Three said.

‘‘This place is all about progression. You can start off with anything from knee-high jumps all the way through to head-high 30-foot tabletops,'' Julian Thompson said.

‘‘It's a good way to get the whole community into it and get better riders and create more interest,'' Mr Corish said.

‘‘Lots of kids are getting into biking now. It's getting bigger all around the world.''

The Four Four Three crew would be teaching the park's users how to look after the track and a shed with the necessary maintenance tools had already been placed on the site.

The men have now returned to their regular jobs but are already looking ahead to the next project - designing and building a bike track at Hawea Flat School.

Mr Corish said whether or not the group would be able to make its sideline bike track building business full-time would depend on demand.

‘‘It's pretty patchy at this stage . . . to be always available to build mountain bike tracks would be a big aim.

‘‘But if this [Lismore Bike Park] is a success it could lead on to other projects and better tracks.''

By .
The News - Central Otago and Wanaka
Comment now