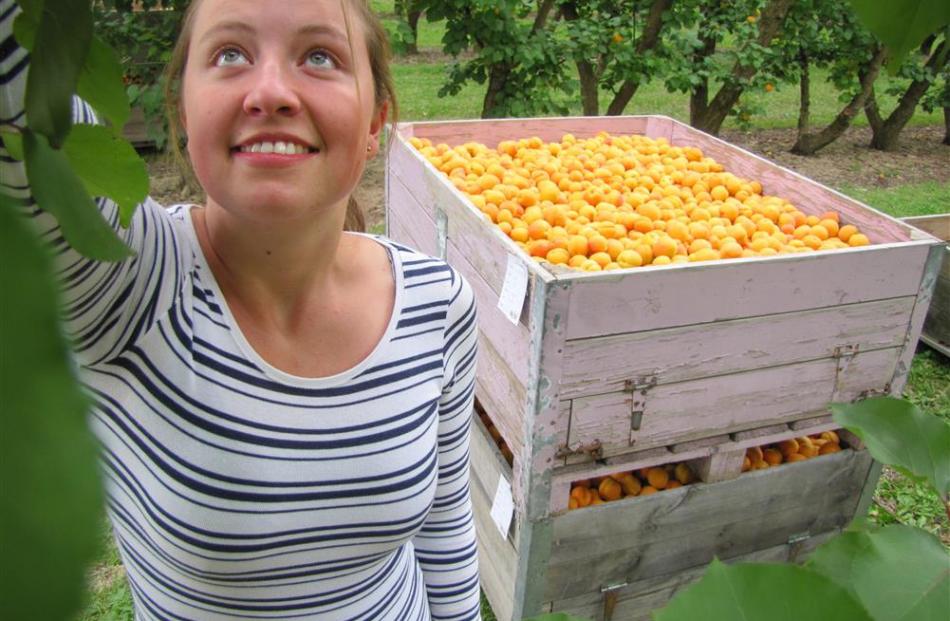 Seasonal worker Paula Oberg, of Germany, tries her hand at fruit-picking at Jackson Orchards in Cromwell. Photo by Jono Edwards.

Some fruit growers are saying Central Otago has plenty of workers despite the Ministry of Social Development maintaining a labour-shortage declaration for the area.

Last month, the ministry declared a pre-emptive seasonal labour market shortage for January 5 until February 15 for horticulture and viticulture, meaning visitors could apply for visa variations that would allow them to work on orchards.

It predicted the need for 3000 workers for cherry-picking alone.

Mark Jackson, co-owner of Jackson Orchards in Cromwell, said he received dozens of inquiries every day and was turning people away.

"There's certainly no shortage over here. It's embarrassing how many people we're getting.

"We are definitely seeing more than last year.''

Harry Roberts, co-owner of H&J Roberts orchard in Earnscleugh, said he usually did not have any trouble finding staff.

Plenty of workers applied on the orchard's website, he said.

"It can get tight at times though. It's hard to know what will happen later in the season.''

Summerfruit New Zealand chairman Roxburgh orchardist Gary Bennetts said it did not seem as though the worker shortage had eventuated, possibly because of media coverage of the issue.

"We've had a slow start to the season so at our orchard we haven't needed too many until recently.''

He expected it would be easy to fill positions as the season picked up.

Paula Oberg, of Germany, is picking and packing fruit at Jackson Orchards for the summer.

She and her boyfriend tried between 10 and 15 orchards before they got jobs, although that was early in the season, she said.

She was not affected by the accommodation shortage in Central Otago as the orchard provided rental housing for some of its workers.

"The weather is beautiful here,'' she said.

"Back home we had heard everybody talking about how beautiful the landscape is and how friendly the people are.''

Ministry southern regional director Sue Rissman said the declaration would remain in place until February 15 as there were no changes in the conditions that prompted it.

"Labour demand is expected to increase over the next week with the cherry harvest and this will be followed by the apricot harvest.''

The worker shortage included viticulture but Central Otago Winegrowers Association president James Dicey said the real need for workers would not come until the start of grape harvests in March.