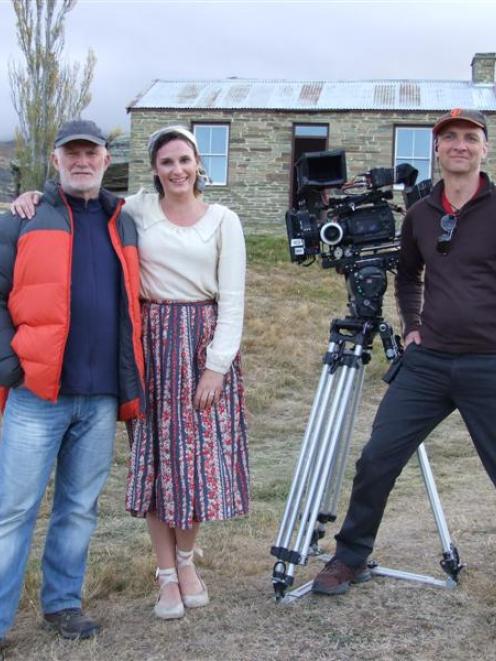 Gibson Group is making the 90-minute programme for TVNZ and has received $900,000 in funding from New Zealand On Air.

Producer Gary Scott said the 10-day shoot involved six days of filming in Wellington, followed by four in Central Otago, which was doubling as French countryside and mountains.

''It's gone really well; it's a great location, people are really friendly and by and large, it's all gone swimmingly,'' he said of the Central Otago stint.

''It's been fantastic here as you don't have to travel far to get something that looks authentic. You get a lot of screen value for free with the landscape down here.''

Director Mike Smith, actress Rachael Blampied, who takes the lead role, and producer Gary Scott relax outside Mitchells Cottage at Fruitlands, after filming finished yesterday on a drama documentary about war heroine Nancy Wake. Photo by Lynda van Kempen.
The documentary has the working title Nancy Wake: A Love Story and Rachael Blampied, who has featured in Shortland Street and Underbelly: Land of the Long Green Cloud, takes the main role. Nancy Wake served as a British agent and was a leading figure in the French Resistance during World War 2 and became the Allies' most decorated servicewoman in that conflict.

As a courier, saboteur and spy, she became known as the White Mouse and was on the Nazis' ''most-wanted'' list. She died in London in 2011, three weeks short of her 99th birthday. The documentary focuses on her relationship and first marriage to wealthy French industrialist Henri Fiocca in 1939.

Mr Scott said Olivers at Clyde, Lauderdale Estate at Lauder, and the Daniel O'Connell suspension bridge at Ophir were among the other Central Otago locations used in the film. Five actors for the lead roles were ''shipped in'' but the extras - about 15 to 20 actors - were Central Otago residents.

Olivers co-owner David Ritchie, of Clyde, was one of the extras and said it was fascinating taking part, especially as he had read a book about Nancy Wake about three years ago.

''Olivers became a French cafe for a scene where she threw a grenade under the table. I played a Gestapo agent in the morning and then was in the French Resistance for the afternoon scenes, so I changed sides fairly rapidly.''

Central Otago District Council tourism marketing manager Alison Mason said despite the district doubling as France in the drama, ''it will have Central Otago stamped all over it and showcase some of the amazing scenery we have here''.