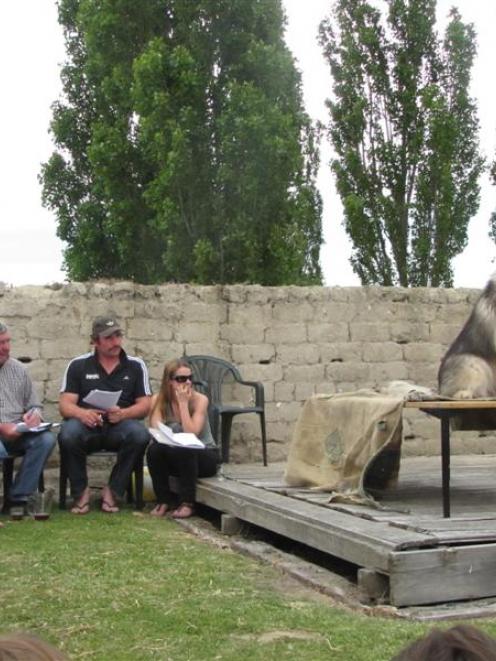 Dylan Boulton (11, of Ranfurly) tries to get his malamute Finn to bark for judges Tony Woodcock, Jim Hore and Andrew Hore at the Poolburn School's Bark-up fundraiser. Photo by Sarah Marquet.
At a small country pub last weekend, it seemed the dogs got more attention than All Blacks Andrew Hore and Tony Woodcock.

The team-mates, as well as Mr Hore's father Jim, were judges at a "bark-up" competition held at the Poolburn Hotel on Sunday as a community fundraising effort for the Poolburn School.

The competition involved about 20 children parading their dogs (or borrowed dogs) on to a stage, then convincing them to jump on to a table and bark for the judges, before jumping through a hoop, over a hay bale and weaving through a slalom.

Jim Hore, an experienced bark-up judge, said he was looking for a dog with obedience as well as a good bark.

Later, after a barbecue, it was the adults' turn to show off their dogs.

MC Arthur Samuel, of Chatto Creek, said if the dog didn't bark then its owner would have to.

Event organiser Karleigh Small said the event and a mystery bottle auction raised about $5000 for a fence around the school and landscaping.