Fire crews clear up a scene where a car rolled near Bendigo yesterday, killing one person. Photos: Tom Kitchin
One person died and five were injured after a car hit a boulder before rolling down a bank and catching fire north of Cromwell yesterday.

Emergency services were called to the crash on the Tarras-Cromwell Rd (State Highway 8) in Bendigo shortly after 3pm.

Police this morning said the Toyota Previa left the road and hit a large boulder embedded in the bank.

"This caused the vehicle to roll, trapping one person inside the vehicle, which caught fire,'' Detective Sergeant Brian Cameron, of Queenstown, said.

''While five of the occupants managed to escape, the vehicle quickly became engulfed in flames, stopping any attempt to rescue the person inside." 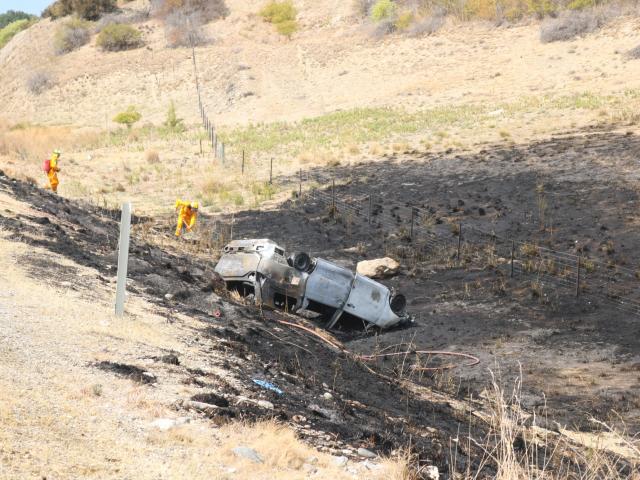 The burnt-out wreckage of the car lies upside down off the side of the road where it started a grass fire.

The person trapped in the vehicle was killed.

St John spokesman Elliot Steel said the other five escaped and were taken to Dunedin Hospital, two with serious and three with moderate injuries.

Crews from Cromwell, Tarras and Luggate attended the accident.

Part of the road was closed for several hours yesterday.

Fire and Emergency spokesman Daryl Ball said the fire in the car caused a small vegetation fire, which was extinguished by fire crews.

Crews from Cromwell, Tarras and Luggate attended the accident.

An Otago Regional Rescue Helicopter was also at the scene yesterday.

The serious crash unit was notified.

Anyone who witnessed the crash was encouraged to contact Cromwell Police on (03) 445 1999.