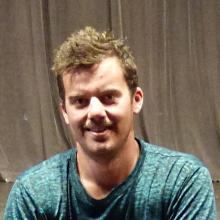 Blake Luff. Photo: CO News
A teacher has lost his registration after he had an inappropriate relationship with a pupil he coached in a sports team.

Blake Luff was head of the physical education department at Lawrence Area School in Otago when he started the relationship with a Year 13 pupil in the middle of last year, the Education Council said.

He sent her flirtatious messages, arranged to meet her then tried to get the girl to lie that they never had.

"I wish I could take you to the hot pools … It would be super romantic," Luff texted the girl.

"Once I got to know you I found out how amazing you are and your strength but also how vulnerable you are. I think you're an amazing person and want to show you that.

"I'm nice to everyone, well I try to be, but your special [sic], we get along great and I love talking to you."

Luff was 25 at the time and the volleyball and basketball coach for the Southern Regional Team. The girl was in the teams but studied at another school.

After a school sports competition the pupil sent Luff a Facebook friend request and they began messaging on Facebook, Snapchat and via text. Pupils knew they were texting and Luff was seen with the pupil in his car.

Luff was warned by the principal at his school to maintain a professional boundary but instead conspired to be "more subtle and discreet" in his contact with the girl.

He continued to prolifically message her on social media, with content of an intimate nature and late at night, and kept meeting her.

When the girl's mum intervened Luff tried to get the pupil to lie that they had not met up. He also told her when she had finished her schooling "no one will care".

The New Zealand Teachers' Disciplinary Tribunal found Luff's behaviour amounted to serious misconduct and "bears the hallmarks of sexual grooming". His attempt to have the pupil collude with his dishonesty was an aggravating feature and proved he knew the relationship was wrong.

It was likely to have adversely affected the learning or well-being of the pupil, the tribunal found. It had a negative impact on Luff's fitness to teach and brought the teaching profession into disrepute.

The tribunal said Luff had a responsibility to maintain professional boundaries.

"Students should be free from any type of exploitation, harassment or emotional entanglement with teachers."

His registration was cancelled.

Luff, now 27, declined to comment when he was contacted by the Herald.

He has since moved to Alexandra where he works as a heat pump installer and was made the youngest president of the Alexandra Musical Society in June this year.