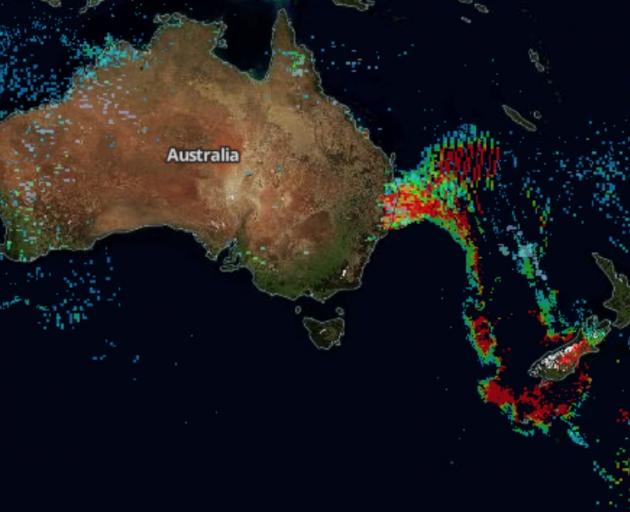 A carbon monoxide plume from the Australian bushfires is captured by NASA satellites on November 9. Image: Rebecca Buchhols, NCAR/Nasa World View
Carbon monoxide concentrations well above normal levels relating to Australia’s recent bushfires have been recorded for sustained periods for the first time at Niwa’s atmospheric research station in Lauder.

Principal atmosphere technician Dan Smale said readings were peaking at more than 150 parts per billion over several days between November 8 to 11, while fires raged in New South Wales.

Measurements made with an instrument known as an in-situ FTIR gas analyser recorded the carbon monoxide concentrations at ground level.

The level of carbon monoxide concentration was still very low "it is not a health issue, it is far below any health level issues at all".

However it showed air travelling across several thousand km from Australia "can actually make it down to ground level here".

Normal measurements were around 60 parts per billion.

"We are a clean air site, and we just get the occasional farm burn off."

A plume of smoke from a local fire could cause a "spike" in measurements but that would be only for a moment.

It was "extremely rare" to record a prolonged spike at ground level.

Being able to "sniff the plumes" at ground level was a "very interesting measurement to make".

On those evenings there were also "some amazing sunsets".

"The sun was pink/orange, just through the haze".

Mr Smale said the measurements made at ground level act as a tracer of weather patterns and would be a focus of future research concerning atmospheric transport.

Niwa air quality scientist Dr Ian Longley said the bushfire smoke had a particularly strong influence over New Zealand in the past week.

"Since December 1 elevated levels of particulate matter have been recorded almost everywhere air monitoring is conducted. However, a more prolonged influence was observed across the upper and central North Island."

Concentrations started rising last Tuesday and Wednesday and by Thursday they were three to four times higher than normal across Auckland, Northland, Waikato, Manawatu and Hawke’s Bay.

But on Friday most North Island towns recorded levels ranging from 36 to 54 micrograms.

"The high levels of particulate matter recorded last week were unusual due to their extensiveness, appearing to cover most of the North and some of the South Island for several days," Dr Longley said.