Petition opposes use of reserve 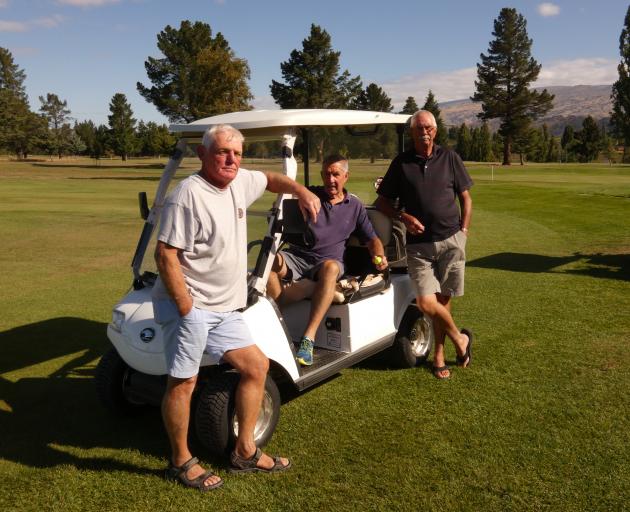 Greg Rabbitt (left), Warren Lees and Chris Wignall (right) believe siting a sewage pumping station in the Clyde Reserve is akin to doing the same in Hagley Park in Christchurch. Photo: Jared Morgan
The Dunstan Golf Club alleges the Central Otago District Council has land-grabbed without proper consultation over plans to site a sewage and wastewater pumping station in the Clyde Reserve.

Up to a third of Clyde residents agree, organisers of a petition say, and more than 300 people have signed it, asking to keep a disused corner of the golf course in the Clyde Reserve that provides access to the Clutha River as recreational land in perpetuity.

‘‘This is our Hagley Park. This is not about about a golf course — this is about a council riding roughshod over the community. You wouldn’t put a pumping station in Hagley Park.’’

The reserve is home to all the sports clubs in the town as well as a holiday park.

Mr Rabbitt believed the new scheme was fait accompli as construction was already under way on stage one of the project. Pipes are being laid in central Clyde leading into the Clyde Reserve to the proposed site of the tanks, which is within 200m of Dunstan Hospital.

The decision was now open to submissions, with those likely to be subject to an Environment Court hearing, and he could not comment further.

Mr Rabbitt countered that with ‘‘The majority of us are angry’’.

‘‘After the golf club objected, the council requested submissions on the proposed change in designation of land, removing it from recreational reserve forever,’’ he said.

Any reclassification contradicted the original designation of the land, Mr Rabbitt said.

It also sets aside the land for recreation and sporting purposes, for the welfare and enjoyment of the public and with regard for the views of present and future users, and the wider community.

Mr Rabbitt said that management plan had been rapidly abandoned.

‘‘Things seem to have changed in less than a year. Recommendations have been made to site a wastewater/sewage pumping station and 630cu m of storage for raw sewage and wastewater underground on land leased to the golf club.

‘‘The decision has already been made as council have without any meaningful prior consultation put pipes under leased land without permission.’’

Mr Rabbitt said it was possible the council had twice breached legal leases held by the club by including land at present leased in a new lease to a private operator, effectively reducing public access, and by laying pipework under land leased to the club without notification or permission.

Land in Muttontown Rd bought for a Clyde sewage and wastewater system in the 1970s remained undeveloped and available for reconsideration but was not included as a potential site, Mr Rabbitt said.

Dunstan Golf Club immediate past-president Jim Page said he was co-ordinating the petition and the number of people signing was ‘‘going up all the time’’.