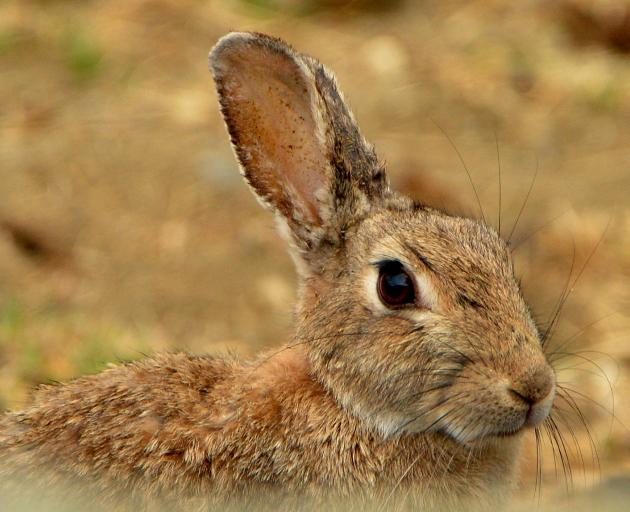 PHOTO: STEPHEN JAQUIERY
The success of a rabbit control operation in Central Otago has been tagged as a "case study" in how landowners and councils can work together to control numbers.

Signs indicated an operation carried out in Clyde in August had had a significant impact on rabbit numbers at the Dunstan Golf Course, Dunstan Hospital and surrounding reserves and properties, the Otago Regional Council said in a statement.

The council started the operation after the project was jointly funded by private landowners, the Central Otago District Council, the Southern District Health Board and the Department of Conservation.

Site inspections showed reduced signs of activity, and no live rabbits identified when there would normally be an increase in numbers.

"I’ve had a number of calls from people in the area saying they’ve never seen so many dead rabbits, so this operation has clearly had a big impact ... the Clyde example shows that a co-operative approach is needed to make a real dent in rabbit numbers."

Council manager biosecurity and rural liaison Andrea Howard said staff were working on replicating the model in other rabbit hotspots.

"The Clyde operation serves as a bit of a case study in how ORC can better facilitate collaborative rabbit management ... We’re looking at a few more areas where we would like to see a similar approach reproduced next winter, and we’re taking on additional staff to ensure this happens."

Landowners needed to take the lead, she said.

"Under our pest plan, controlling rabbits is the responsibility of landowners, but ORC will take more leadership in organising collaborative efforts like this one."

Secondary control measures would be needed to make the most of the poison operation, and that meant landowners following up with secondary controls such as trapping, supplementary poisoning and rabbit-proof fencing, Ms Howard said.