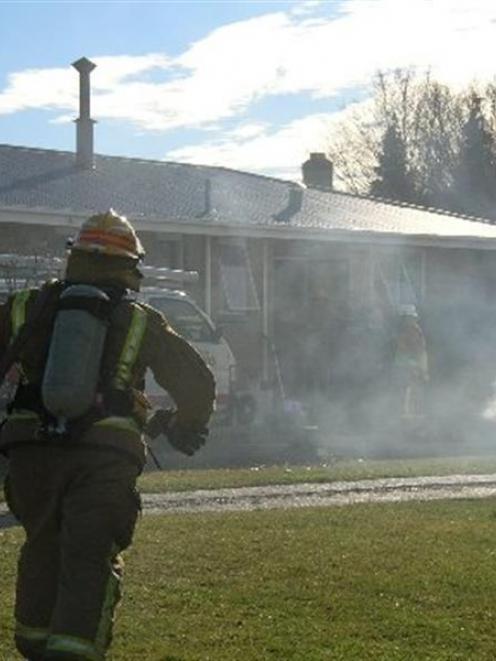 A firefighter runs towards 39 Marslin St in Alexandra with a hose at the ready during a midday house fire which claimed the life of an elderly woman yesterday. Photo by Rosie Manins.
Police are praising the actions of a carpet cleaner who tried to save an elderly Alexandra woman after she caught fire in her home about midday yesterday.

Ethel Watt (86) died during the incident, in which her clothing was engulfed in flames.

She was the sole occupant of the Marslin St house to which firefighters, St John ambu-lance staff and police were called at 11.50am yesterday.

Detective Sergeant Derek Shaw, of the Central Otago CIB, said the woman was inside the kitchen when a carpet cleaner, outside the house at the time, heard a smoke alarm activate and simultaneous yelling from within the house.

"He entered the house and found the victim's clothing totally engulfed in flames. On arrival, emergency services found the woman deceased in the kitchen," Det Sgt Shaw said.

He said the carpet cleaner, who had been working at the woman's house yesterday, removed what appeared to be the woman's dressing gown and threw it outside the front door where it continued to burn.

"He did an exceptionally good job dousing flames although the victim has died. I want to emphasise the great effort made by the workman, who received minor injuries as a result [of his actions]," Det Sgt Shaw said.

The Central Otago CIB and fire safety staff are investigating the incident and are still to determine the cause and origin of the fire.

"The house was completely untouched [by fire], although the victim's clothing was totally involved. The circumstances leading to her getting burnt are unsure," Det Sgt Shaw said.

The exact cause of the woman's death is not yet known.

Firefighters ventilated the house before police began their investigation about 12.30pm.