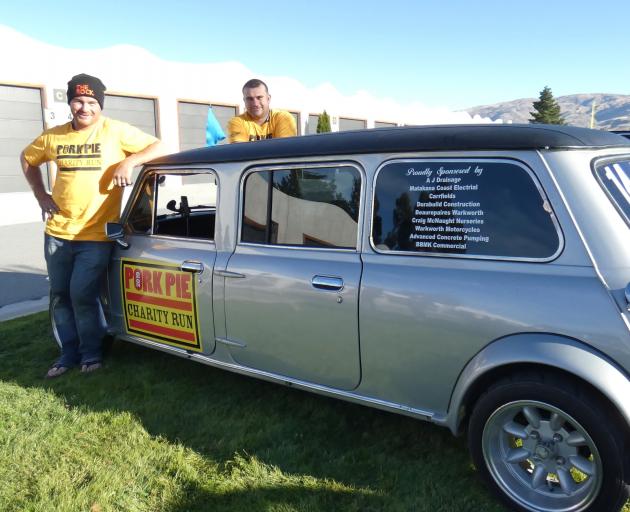 Yesterday the teams took a well-earned break from their fundraising to have a spin around the track at Highlands Motorsport Park in Cromwell.

The journey has been an opportunity for Delwyn Hills, of Whangarei, to reconnect with her son Carlan Wickham-Hills.

Mr Wickham-Hills has been living in England since 2006, but he travelled back to New Zealand to take part in the charity run with his mother.

It had been an opportunity for them to spend more time together than had been possible for many years, he said.

Adventures along the way had included encountering a herd of cows, and Mr Wickham-Hills had raised $200 by taking part in a naked dip in the water.

Overall they had raised more than $10,000 for KidsCan.

Brothers Willie and Sam Ryburn, of Warkworth, were taking part for the third time, driving a ''stretch limo'' Mini that had been transported from Australia.

They had experienced a few hiccups, including blowing a head gasket between Kaikoura and Cheviot, but were looking forward to completing their journey.

The great company of the other teams was one reason they enjoyed taking part, Mr Ryburn said.

Spokeswoman Karleen Edmonds said the charity run, which travels more than 2500km from Kaitaia to Invercargill, had already raised more than $250,000 for KidsCan, a record for the event.

Although the journey finishes today, fundraising will continue for another month, she said.