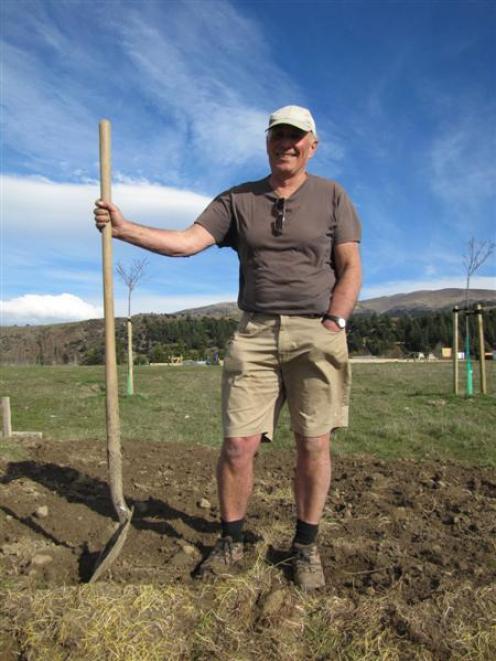 Graeme Perkins makes a start on landscaping his Luggate section. Photo by Mark Price.
"Patience" is what is required for property developers, according to Delta's joint venture partner in Luggate Park, Jim Boult.

Mr Boult, of Christchurch, was reluctant to discuss with the Otago Daily Times details of his arrangement with Delta except to reaffirm the joint-venture arrangement and say: "If you want to be in the property business, you have got to be very patient."

Delta invested $4 million in a 50-50 stake in stage two of the subdivision in 2008 but last week, the ODT reported Delta was understood to be considering a "write-down" of up to $9 million in its investment at Luggate Park and also at Jacks Point, Queenstown.

Asked if he had undertaken a similar write-down, Mr Boult said: "I'm a private owner. I'm Jim Boult. I'm obviously not in the same boat they are in."

The stage two land in which Delta has an interest is yet to be developed, although stage one of Luggate Park has streets and services and some new homes.

The decline in the value of those sections since they were first offered for sale was spelled out by three section owners spoken to by the ODT.

In 2009-10, Graeme and Yvonne Perkins, of Dunedin, identified a half-hectare section they were keen to buy in an area where sections were advertised at $285,000.

Mr Perkins said they watched and waited as the price came down.

Someone must have lost [a lot] of money."

And Graham McArthur and partner Deb Wilson, of Dunedin, first looked at a half-hectare section at Luggate Park when it was priced at more than $280,000.

When they bought it at auction, they were the only bidders aside from the owner and got it for $151,000.

Mr McArthur believed initial interest in the subdivision might have been boosted by the prospect of Contact Energy building the Luggate dam, and creating a lake in the vicinity of the subdivision.

His section was one that would have had a lake view but by the time he bought it, the dam idea had already begun to fade.

Mr Boult did not agree prices had halved at Luggate Park and believed changes in values there were no different to property developments elsewhere.

"It's not special. It's no different from any other property."

Asked if there was likely to be any development of stage two in the near future, Mr Boult said it depended what the market was like.

"Clearly it's not at that stage yet. It's improving. It's getting better but I say again, you have got to be very patient in the property business."