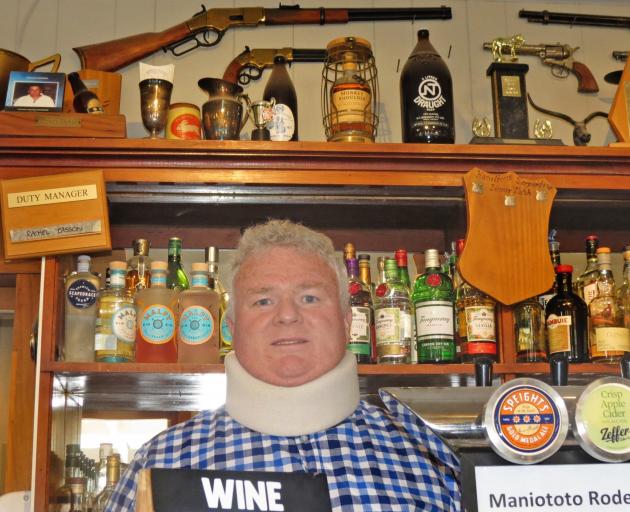 Waipiata Country Hotel publican Mark Button has had to reassure regulars the pub being put up for sale has nothing to do with his health, after neck fusion surgery to alleviate an old rugby injury. PHOTO: TRACIE BARRETT
The business fortunes of Maniototo publicans Mark and Nikki Button have been linked to the Otago Central Rail Trail for more than a decade.

Mr Button said he and his wife had ridden the rail trail 11 years ago and wanted to stay overnight in Waipiata but there was no way to do so, so they had to continue on.

The couple acquired Tussock Lodge in Waipiata shortly after, turning it into accommodation.

"We thought there might be investment opportunities and did some research and took on Tussock Lodge," he said.

About five years later, the Waipiata Country Hotel came on the market.

After some negotiation, the Buttons bought it.

"Coming from not being a publican, we thought it was easy on that side of the bar so it would be easy on the other," Mr Button said.

It was not quite that easy, but the couple spent almost seven "really enjoyable" years as publicans, building a farflung reputation for their food while there.

Last week they put the pub up for sale.

Despite a population of only 15 in Waipiata, the hotel has become a destination venue for food lovers, as well as a welcome stop for cyclists on the rail trail.

"Our record night was 320 meals on a Friday night," Mr Button said.

"Over Christmas, we were doing over 200 meals a night and averaging about 150 lunches."

The couple planned to remain living in nearby Patearoa but felt it was "time for a bit of a change".

They would retain Tussock House and develop it further, finishing the landscaping and making it larger, "council willing".

They would also retain the Waipiata Pie Co, a food offshoot that had come about by chance but which had been instrumental in bringing customers to the pub.

It began when the restaurant had two lamb shanks left over from a buffet and a staff member suggested making them into pies, Mr Button said, "because everything tastes good in pastry".

They were a success so the next day the kitchen cooked up a bunch of lamb shanks and turned them into 70 pies.

Rail trail cyclists tried them and recommended them to others on the trail, and a second business was born.

More than 2000 pies a week were sold from the hotel, and another 150 to 200 a week were sent out frozen to meet orders, Mr Button said.

The couple planned to set up a portable kitchen to continue the pie business.

"People stay with us because of the pies, because they’ve heard the name," Mr Button said.