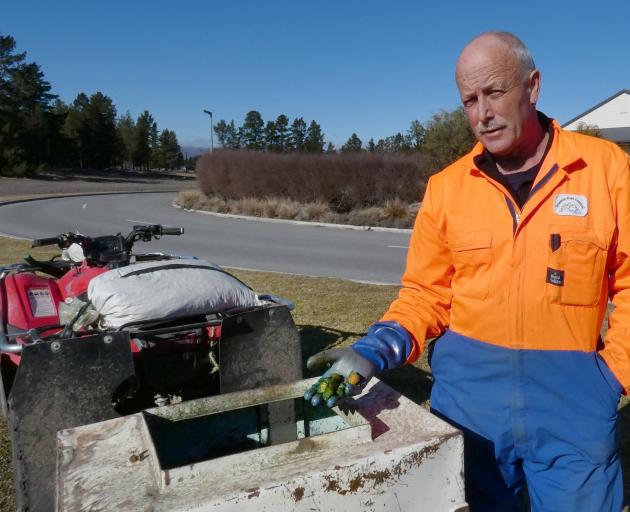 Peter Preston of Preston Pest Control on the job dropping carrot laced with the anti-coagulant poison Pindone in the Dunstan Hospital grounds in Clyde. PHOTO: JARED MORGAN
Rabbit numbers in Central Otago are reaching the levels seen in the "bad old days" post-rabbit board closures, a veteran pest controller says.

A large-scale rabbit-control operation on the fringes of urban Clyde yesterday on land around Dunstan Golf Club and Dunstan Hospital and on private property.

Contractor Peter Preston, who operates Preston Pest Control from Lake Hawea and Dunedin, began the drop of carrot laced with the anti-coagulant Pindone on hospital land and said the operation would involve three drops of 1 tonne each in "quite a heavy spread".

The reason for three poison drops was rabbits operate in a hierarchy.

"Dominant rabbits eat first then go back to their burrows and subordinate rabbits eat last."

The poison took 10-20 days to kill a rabbit after it was ingested, he said.

The Pindone was used because 1080 was a "no-no" in built-up areas, particularly because dogs were so susceptible to it.

Mr Preston said rabbit infestation was measured on the the McLean scale which relied on a visual assessment of rabbit signs.

The maximum recommended level was 3 but he estimated the problem in Clyde was level 5 or higher.

He said in his 40 years in pest control, the problem in Central Otago was on par with that of the ’90s when rabbit numbers exploded following the end of rabbit boards.

That continued until rabbit calicivirus disease (RCD) was illegally introduced into New Zealand in 1997.

However, by the early 2000s rabbit numbers bounced back, Mr Preston said.

Another issue was changing land use and the growth in lifestyle blocks where rabbit numbers were going unchecked.

It was a common misconception 1080 was widely used and many people living on those blocks were resistant to poison operations as a consequence.

"The numbers are back to the bad old days."

Mr Preston said the work would be completed by the end of this month.