Reading for a rainy day 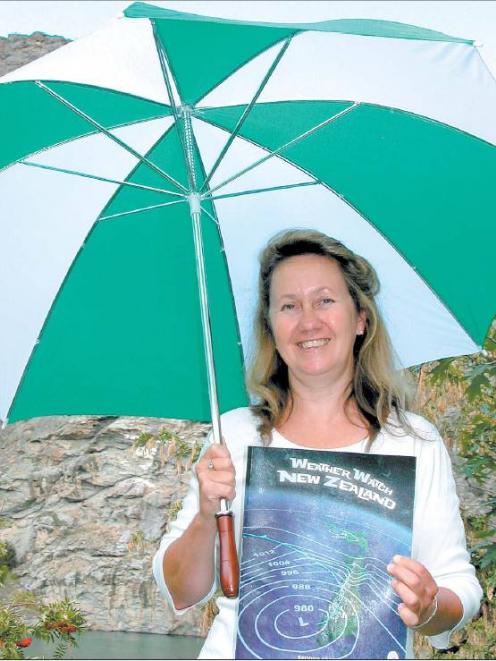 
‘‘I had a birthday last week and found out about the awards on Monday. The news was a nice, late birthday present,'' Carrod Kafka said.

Her book was published by Reed Publishing and the company advised her it was one of five finalists in the non-fiction section of the New Zealand Post Book Awards for children and young adults.

The weather book has been ‘‘a couple of years in the making'', she said.

‘‘I thought it would be a good idea to do a cloud recognition book for children.''

After discussing it with the publishers, the idea evolved into a weather book for children, as there were none on the market.

Carrod Kafka learned a lot about the weather as she carried out research for the book.

‘‘Of course, I wanted it to be right, so I got a meteorologist friend to proof it for me.''

Carrod Kafka provided many of the photographs for the book.

She and her husband Stephen were born in England and settled in Cromwell 14 years ago, after sailing around the world for nine years with their family.

Trained as a teacher, Carrod Kafka ‘‘home-schooled'' their children onboard the sailboat.

Max, the youngest of their four children, was born in Central Otago. ‘‘I guess it's strange that after so long at sea, we've ended up as far inland as it's possible to be in this country,'' she said.

They still have a sail boat in Dunedin and her husband's work revolves around the sea, as he carries out scientific research voyages.

When they first came to New Zealand, the couple considered living in Wellington but a friend suggested they check out the South Island first, and Central Otago in particular.

‘‘When we drove through the Cromwell gorge we were just blown away by the landscape, so this is where we stayed,'' she said.

‘‘We love the hot summers and enjoy skiing in winter and still have the boat in Dunedin, so get the best of all worlds.''

It was Carrod Kafka's work as a teacher that was the catalyst for her foray into writing.

Her first non-fiction children's book, The Vineyard, was published in 1999 and another, Pet Day, followed in 2000.

She preferred to write by hand, although she also uses a computer.

‘‘Writing by hand just feels nicer somehow, but I do write on the computer too.''

Although her writing has mostly been non-fiction works for children, she is keen to try writing fiction and aims for an adult readership.

‘‘There never seems to be enough time but I've always got lots of ideas bouncing around in my head, so there's many more books to come.

‘‘One of the things I'd like to write more about is our sailing experiences.''

- The winners of the 2008 children's book awards will be announced on May 21.