Ready to paint the town red? 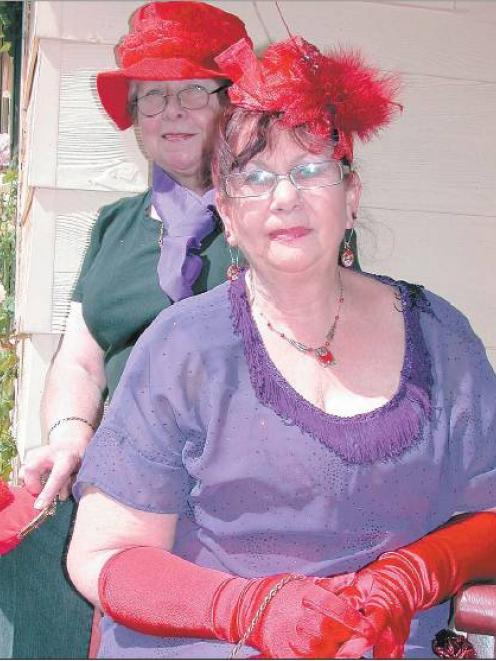 The more the merrier: Cromwell women Lynne Anderson (left) and Helen Smith are looking for more ladies to join a Central Otago chapter of the Red Hat Society.
‘‘Fun, friendship and frivolity'' is the catchphrase of a new group that has been set up in Central Otago.


A women's group called the Pinot Noir Pets is the newest chapter of The Red Hat Society.

Cromwell women Helen Smith and Lynne Anderson have launched the group and are keen to hear from other ladies with a good sense of humour.

‘‘It's not a craft group, nor a service group nor a fundraising group; it's a funraising group,'' Mrs Smith said.

The society started several years ago in the United States and has chapters in many countries around the world. In New Zealand, there are 66 branches, 19 of them in the South Island.

The international group takes its title from a poem called Warning by Jenny Joseph. The poem is about a woman who plans to wear the colour purple when she gets old, matched with an ‘‘unsuitable'' red hat.

It goes on to list a collection of activities the author thinks she should indulge in when older, to make up for the sobriety of her youth.

‘‘Quite a few people know about the poem and agree with its sentiments and that's how the regalia [a purple dress and red hat] started up,'' Mrs Smith said.

The group is focused on fun.

‘‘Most of us of a certain age have been involved in all kinds of groups but this one is a ‘for us' group, entirely about having fun,'' Mrs Anderson said.

‘‘I wouldn't say we're rebels, but maybe we're old enough now to get away with things.''

The group will get together once a month for outings.

‘‘There's no rules and it's all very low key. For our meetings, we might do something like get together for a meal, or go out and play mini-golf or watch the movies. It's just about likeminded ladies getting together, wearing the regalia, and enjoying ourselves,'' Mrs Smith said.

The title of the Central Otago group was chosen because pinot noir was synonymous with the district but she was quick to point out it was not a wine group.

‘‘Napier has its Deco City Divas and there's the Cambridge Fillies and in Dunedin, there's the Red Revellers, who are all chapters of the society.''

The only prerequisite was a good sense of humour and a desire to meet new people.

Women over 50 could wear the full regalia, while those under 50 could join as ‘‘ladies-in-waiting'' and wear pink and lilac instead of red and purple.

• For more information, check out the website on www.redhatsociety.com or contact Mrs Smith by phoning 445 0252 or Mrs Anderson on 445 0964.