Resident dentist for town at last 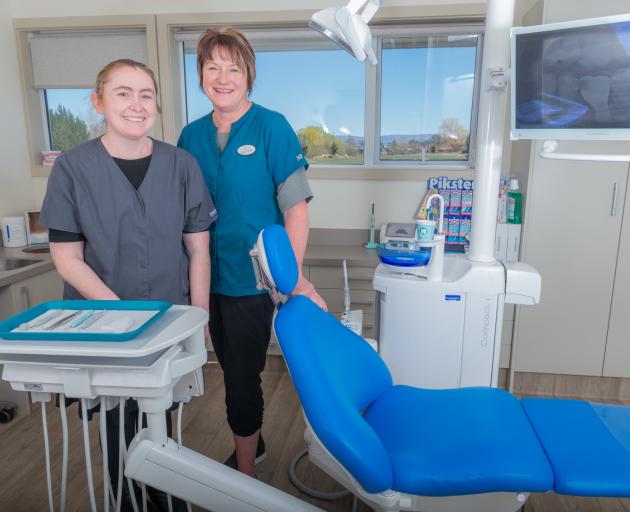 The Ranfurly dental base at Maniototo Health Services will extend its days of service from two to three in the new year. Among those who have worked from the facility this year are Dr Amelia Paterson (left) and dental assistant Carolyn Steele. PHOTO: SUPPLIED/CENTRAL DENTAL
Maniototo will soon be home to a resident dentist.

Dentist Dr Steven Smith will take on the role from February, after deciding to return to Ranfurly from Australia.

Dr Smith will be employed by Central Dental, which will allow the business to extend its days of service from two days a week to three, due to growing demand.

Central Dental directors Amelia and Ben Paterson, who also have practices in Alexandra and Cromwell, offer the service from the dental room at the new multimillion-dollar Maniototo Health Services complex.

Until then, there had been no permanent dental care in the district for a decade.

Demand for the service has continued to grow over the past 12 months, which includes people who used to travel two hours to Dunedin for dental care.

The Ranfurly service, which was available on Mondays and Tuesdays, will change to Tuesdays, Wednesdays and Thursdays from February 1, once Dr Smith starts.

Mr Paterson said the facility had been well used over the past year.

"We are booked out two days a week, three weeks in advance."

That demand had prompted the three-days-a-week service, which would mean people could be seen sooner.

New clients are seen most days.

"We are also getting people that haven’t been [to the dentist] for eight to 10 years because of the sheer hassle of getting to appointments," Mr Paterson said.

Amelia Paterson, a doctor, said expanding the service into Maniototo had saved some residents from their usual two-hour drive to Dunedin.

She said farmers, in particular, were often unable to afford the time to stop their tractor work, to make the four-hour round trip to Dunedin.

The service also caters to children from year 9 up until they turn 18.