By Oscar Francis
0 Comments
A family-run honey stall is offering a sweetener in exchange for information about the identity of a sticky-fingered suspect who brought a bad buzz to an honesty box in Ettrick.

Honey by Wrights co-owner Tracey Pringle said about $200 worth of honey was stolen at exactly 6.11pm on Sunday.

She knows the exact time, because the heist at the honesty box in Roxburgh-Ettrick Rd (State Highway 8) was caught on video by a security camera set up for the purpose.

The video has been viewed over 55,000 times, after it was posted on Facebook by her husband Michael Wright that evening.

It shows a woman, dressed in a "New York" emblazoned sweatshirt looking quizzically at the honey on display at the roadside stall.

Her initial look of wonder quickly turned less sweet when she started piling honey products into her arms. 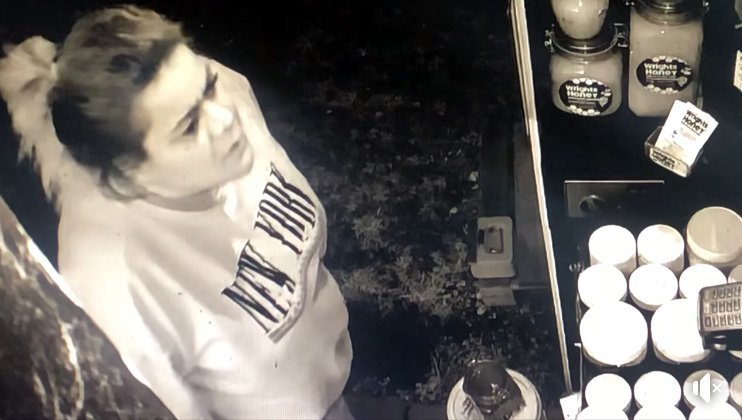 An unidentified woman who was caught on camera pilfering an honesty box in Ettrick on Sunday. PHOTO: SUPPLIED
Mrs Pringle said she first discovered the theft on Sunday when she was passing the stall and noticed there was "quite a bit" of honey missing without money being left to pay for it.

The Wrights were offering a kilogram of their finest clover honey for information leading to the successful identification of the honey thief.

While the business had hoped they would never have had to put up security cameras, the investment had been successful in finding other honey thieves after the footage was posted on social media.

When a thief was identified, nine times out of 10 the person would pay up, Mrs Pringle said.

It was a great, old fashioned thing to be able to to run a stall based on an honesty system.

A lot of people, both locals and passers-through, enjoyed the 24/7 operation and it would be a shame to have to close it because of people like the honey thief.

She hoped the thief would return the products or pay up for what they pinched.

The majority of people were honest and used the honesty box with good intentions, Mrs Pringle said.