Rise in e-bike use opening markets

Trail trust manager Tania Murphy said this year's annual November trail survey of about 300 cyclists showed 30% of them were travelling on electric bikes, compared with 20% in last November's survey.

About 15,000 cyclists did the entire 150km trail every year and another 60,000 were estimated to cycle part of it annually. 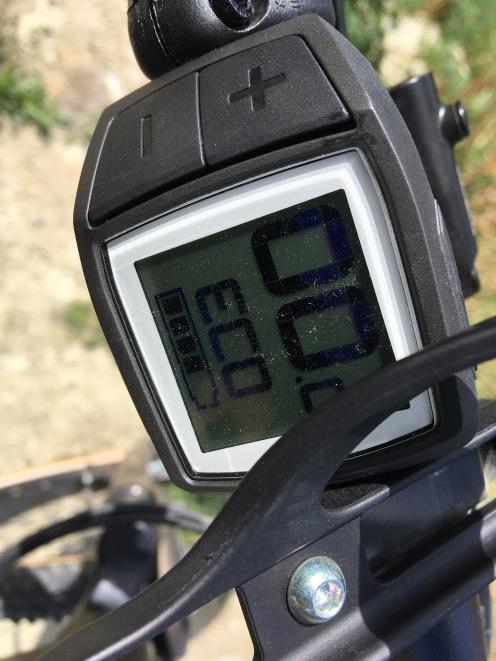 A display on an electric bike shows the different settings on the bike. Photos: Pam Jones
Mrs Murphy said it was not known if the 30% e-bike figure applied to the total user numbers, but the snapshot survey showed e-bike usage was increasing steadily every year.

This was positive for the trail and opened up more opportunities for businesses and users.

"The increased use of e-bikes has the potential to extend the range of participants who may choose to accept the challenge of cycling the Otago Central Rail Trail. Consequently, the ability to promote and provide the trail as a cycling `experience for all seasons', is a much more achievable goal than in the past."

Bike It Now co-owner Kathryn (Fletch) Fletcher said about 40 of the 180 bikes at her business were electric bikes, up 20% on the previous year.

The Clyde business was the first to invest in e-bikes, in 2014, and hired e-bikes to other trail operators for the next two seasons. As well as hiring e-bikes, it now sells them, too.

Ms Fletcher said e-bikes were allowing those who were previously unable to cycle the trail to do so, and spend more time doing side trips off the trail. They also helped cyclists who encountered bad weather on the trail, such as strong winds.

Trail Journeys general manager Simon Stevens said about 10% of his company's 400 bikes were e-bikes, numbers having doubled year on year for the past four years.

The assistance e-bikes offered was "terrific", and he was seeing more people in their 60s and 70s able to cycle the trail because of the e-bikes.

Cyclists still pedalled on an e-bike, and the cardio benefit for cyclists was similar to other bikes - "it just takes the edge off the hills and adds to the enjoyment", Mr Stevens said.

"It's not cheating. It's getting people out and active that might not have done that in the first place."