Scattered community passes on its spirit

On the vast and far-flung farms of Maniototo, people are no strangers to social distance and isolation but as a video shows, technology and Covid-19 can bring a community together.

The video features children across the area, from Styx Valley, Naseby, Wedderburn, Kyeburn, Patearoa, and through to Longlands Station, towards the Waitaki district, thanking essential workers, from medical staff to stock agents with scene cuts punctuated by the passing of a toilet roll. 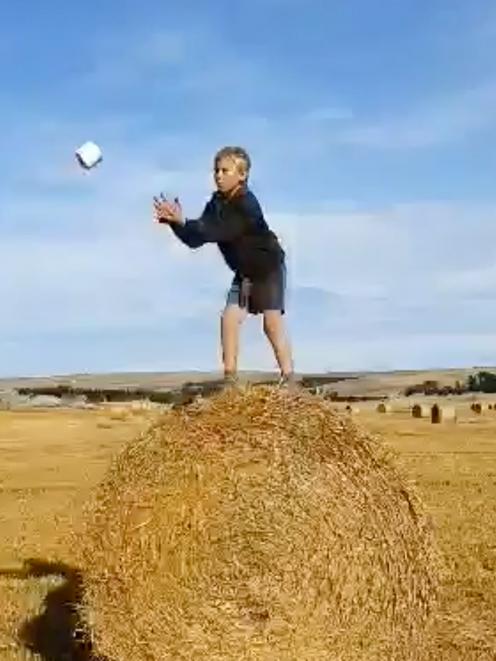 Sam Elworthy (9) catches a toilet roll. IMAGE: SUPPLIED
The video is a collaboration between women across Maniototo, Styx Valley woman Erin Elworthy, of Paerau, and Frankie Hore, from Stonehenge, who initially discussed the idea, prompted by a video shared to social media by a friend of Mrs Elworthy’s.

The clips the pair gathered were then pieced together by Ellie Duncan, of Wedderburn.

‘‘It was just as we went into lockdown and a friend of mine posted a similar one from the UK and I said to my friend through Messenger ‘we should do one’.’’

The response led to more clips being sent through than the trio could handle, Mrs Elworthy said.

The central theme was the ‘‘ridiculous’’ rush on toilet paper and involved some deft editing and choreography to ensure when the toilet roll was passed left of frame it entered from the right, she said.

Former All Black Andrew Hore, no stranger to passing a ball, initiates the roll pass.

Technology was key to pulling the whole thing together and showed in lockdown people could stay connected.

‘‘Lockdown made it more special because everything was so different. It was just to lift people’s spirits and just for people at home.’’

Although she was reluctant to use the word ‘‘viral’’ in the current climate, the video quickly spread through the heartland farming community.

Mrs Elworthy said her three children, Georgia (12), Sam (9), and 7-year-old Arthur featured in the video alongside other children and adults from across the area.

She believed the largely farming community was lucky in lockdown because family ‘‘bubbles’’ were huge compared to those in towns or cities.