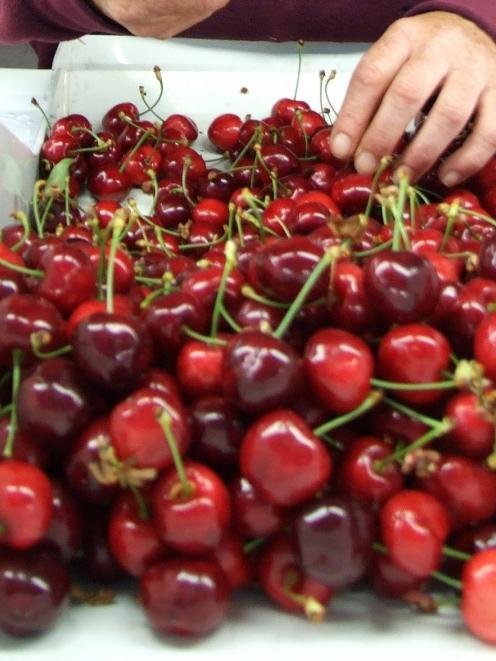 About 40% of this country's export cherries are sent to Taiwan and Summerfruit NZ chief executive Marie Dawkins said the tariff-free agreement would take effect from the start of next month .

The first export cherries to Taiwan this season would be sent within days of the new agreement taking effect.

The tariff had been 7.5% and the agreement was the result of the comprehensive trade deal between the two countries announced in July, she said.

Similar sentiments were expressed by other Central Otago growers. General manager of 45 South, Tim Jones, said any reduction in tariff was great news and this deal was good for both the importer and the exporter.

His company owns and manages more than 150ha of orchards around Cromwell, which produce 30% to 40% of New Zealand's export cherries. Mr Jones expected a harvest of 1000 tonnes this season.

''We target a wide range of markets, although 40% of our product goes to Taiwan, and it's important for growers to keep looking to diversify,'' he said.

''If you go to Taiwan, you won't see our cherries very often in supermarkets, but you will see them in the high-end gift shops, maybe as part of a box of New Zealand-grown fruit.''

Mr Jones said the season was shaping up well at this stage, considering the less than promising weather at the start of spring.

''We're still at the whim of Mother Nature until harvest, though.''

Morning showers yesterday only ''knocked the dust off the trees'', he said. About 1.2mm of rain fell in Cromwell.

Ms Dawkins said the timing of the new agreement was slightly earlier than expected and growers were already well-placed to make the most of the opportunity.

The first cherries for export are harvested in early December in Marlborough and by later next month, Central Otago takes over as the major supplier of cherries.

The district produces 90% of this country's export cherries and the export season continues until mid-February.