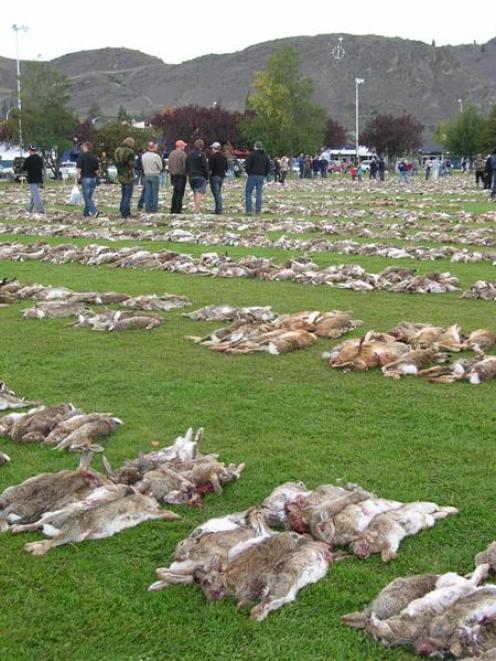 Rabbit carcasses littered Pioneer Park in Alexandra on Saturday when 460 shooters from 39 teams laid out their kill for the final count.

Winning team Cuniculus Terminators, made up of 12 shooters from Southland and Canterbury, shot and retrieved 978 rabbits from its allocated Shepherds Creek block.

Hares, stoats, ferrets, goats, possums, turkeys and the odd feral cat were among the tally of 15,495 pests.

The competition started on a frosty Friday morning, when teams were allocated rural farm blocks roughly within one hour's drive from Alexandra.

Drawn by ballot under police supervision, the blocks were rated on a scale of 1-10 by the farmers who judged their rabbit infestation levels.

Among those lucky to get good blocks was one team which was allocated Ida Valley Station.

Hunt convener Dave Ramsay said the station owners had made a special request this year for a team to hunt an additional night, following Saturday's final count in Alexandra.

The event's popularity meant some shooters were again turned away, with 120 not making the cut due to a lack of suitable shooting blocks.

Mr Ramsay said with teams each sporting names such as Calici Crusaders, Hair Raising Mutineers, Cuniculus Terminators, Anti Pesto, and Oma Rabiti, a jovial atmosphere ensured the hunt was as much fun as it was competitive.

"Everything was streamlined and went very well, considering we had almost 50 more shooters than last year when 35 teams entered. It was a great event."

Hunters came from throughout New Zealand, and women and older children also sported guns or helped out.

Teams assembled at Pioneer Park after the hunt for a hot lunch, live music, prizegiving, and to swap stories.

Organised by the Alexandra Lions Club, the annual hunt has been responsible for culling almost 200,000 rabbits from Central Otago since its inception in 1991.

Local scouts also benefitted, being commissioned by the Lions to pick up all the dead rabbits and dispose of them in a purpose-dug pit.

Kills from the past 10 hunts: