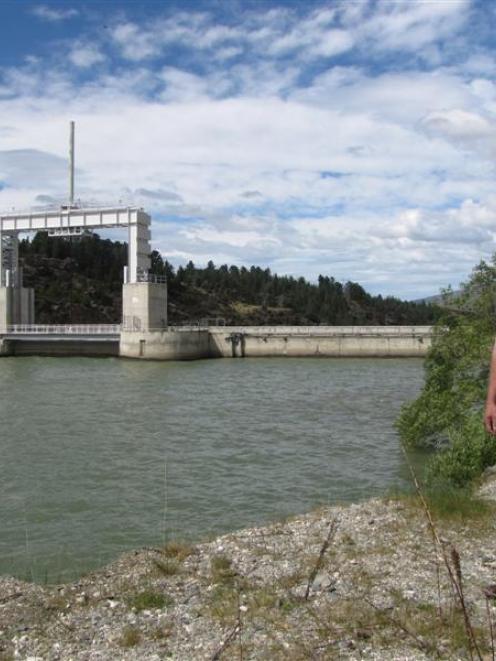 Roxburgh Gorge cycle trail trust chairman Stephen Jeffery stands near the Roxburgh Dam where the 43km trail from Alexandra will eventually end. Photo by Sarah Marquet.
The only thing left in the way of the first 10km of the controversial 34km Roxburgh Gorge cycle trail is the contractor's diary - the trail trust received the final sign-off from Land Information New Zealand (Linz) late last week.

Trust chairman Stephen Jeffery said technically that meant construction could start straight away, but the trust still had to meet successful tenderers John Sutton Contracting to discuss a start date. He expected to do so over the next couple of days.

John Sutton told the Otago Daily Times yesterday he did not have a start date in mind.

Mr Jeffery said a section in that first 10km, bordering Bruce and Leigh Johnston's property, was still a "bit rocky". The trust opted to use the marginal strip along that section but the exact whereabouts of the strip is being challenged by the Johnstons.

Initially they agreed to work with the trail trust but they have since issued the trust and the contractors with a trespass notice.

They declined to comment but the ODT understands they intend to commission a formal survey of their property boundary.

Mr Jeffery said by using old maps and GPS, the trust had pinpointed the marginal strip.

The budget for the trail is around $3.4 million. A grant of $2 million has been made by the New Zealand Cycle Trail project and the rest is expected to come from community funders.

Concern about the trail has been raised by other Central Otago residents, including Otago Central Rail Trail chairwoman Daphne Hull. She and others had spoken of concern for the environment and the visual impact of the trail.

Mr Jeffery said the trail's impact would be more pronounced initially "but over time it will blend in".

The New Zealand Cycle Trail organisation had suggested the trust look at replanting the area.

Mrs Hull said her concerns were eased by the news the trail trust had systems in place to deal with the lasting visual aspect and if done well it would be "a lovely add-on to the Otago Central Rail Trail and great for Roxburgh."

Mr Toyer also raised concerns about historical sites in the gorge and how they would be protected.

Historical points of interest identified along the trail route are the stone bridge piers at Alexandra, a stone wall in Old Bridge Road and Herron's Cottage in the Roxburgh Gorge. The Flat Top Hill conservation area contains significant and native plants.

The trail trust had had an archaeological assessment done and would continue to work with the New Zealand Historic Places Trust and the Department of Conservation to avoid any adverse effects on those sites, as required by the resource consent.

This first section of the trail, from Alexandra to Flat Top Hill, is the only part of the trail secured so far but Mr Jeffery said it was close to securing the rest of the trail route to the Roxburgh dam.

They were talking to two major pastoral leaseholders, the next two landowners after Flat Top Hill, and trying to work some compensation into their tenure reviews for the land the trail would cover.

However, there was still an issue surrounding the Miller Family's farm at Shingle Creek, as the Millers had said the trail would not cross their land.

At this stage, the proposal was to transport cyclists by boat to a point further down the river, bypassing the Millers' property.

Mr Jeffery said this was not necessarily a bad thing, as it would provide this trail with a point of difference.

The rest of the trail, from Shingle Creek to the Roxburgh dam, was looking "favourable".

Once the trail has been completed, it will be the trail trust's responsibility to maintain it and raise the funds for the maintenance.

The Roxburgh Gorge trail will eventually link up with the Clutha Gold Trail, which will take cyclists from Lake Roxburgh and Lawrence.

Although a separate track, the Clutha Gold trail also received funding from the New Zealand Cycle Trail project and its construction is expected to begin soon.