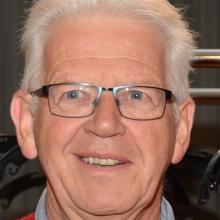 Peter Mead.
Proposed changes to the Central Lakes Trust's governance are ''a callous attack on the very core of democracy'', the trust's first chairman says.

Peter Mead, of Cromwell, served as chairman for five years from 2000. On holiday overseas, he emailed the Otago Daily Times a statement yesterday challenging what he called an ''appalling'' proposal.

The trust announced the planned changes last week and said they would be voted upon as part of the trust's election process in November.

Asked for comment on Mr Mead's criticism, trust chairman Malcolm Macpherson said the community and the trust would not lose anything from the changes, but would gain expertise and knowledge.

There would still be a majority of elected trustees. The proposal was to include the option of three appointed trustees, whose terms would be staggered to provide greater governance continuity, alongside five elected trustees.

The trust is now made up of six trustees elected by the public. They can serve a maximum of three terms of three years and under the current governance, there was a risk all trustees could retire at the same time.

Mr Mead said the proposal would limit the democratic right of the community to elect future trustees.

''... the only effective restraint the community has on the unfettered power of the trustees is its absolute right of election. To suggest that this should be limited is a callous attack on the very core of democracy.

''Having a go at justifying this oppressive assault on democracy by citing a requirement for unidentified skill sets and a need for succession planning simply does not wash.

''The trust is not a corporate entity. It is a very well-resourced but relatively straightforward charity. It basically receives income from its investments and distributes part of this by way of grants for community charitable purposes,'' Mr Mead said.

Dr Macpherson said in an increasingly challenging energy industry and investment environment, the trust needed trustees who brought the appropriate expertise to the trust's decision-making.

The proposed changes were ''the best of both worlds - community representation, plus expert advice, making the best possible decisions''.

''Since it was established 16 years ago, Central Lakes Trust has grown to become the largest community trust fund on a per capita basis in the southern hemisphere. The total value of the trust's investment fund has grown to more than $325million and is expected to grow to $500million by 2025. That is no mean feat and is the result of successive boards' hard work and diligence,'' Dr Macpherson said.

If voters agreed, the changes would take effect from 2017 for appointed trustees and by 2019 for elected trustees.