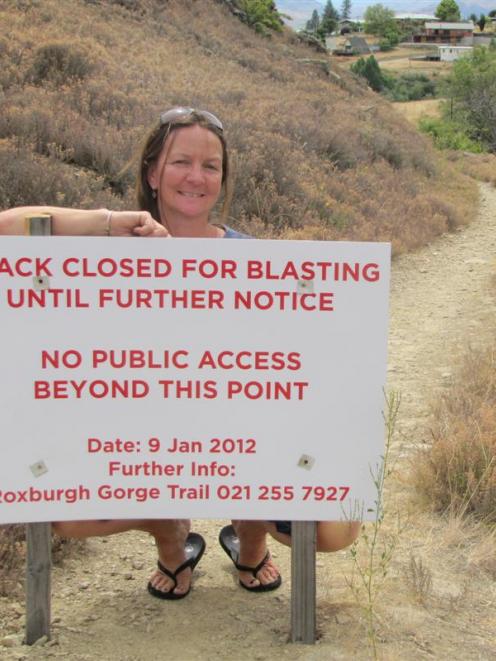 Samantha Rule, of Clyde, cannot run on this track because of blasting work. This sign is at the start of the Lake Roxburgh walkway, at Graveyard Gully, Alexandra. Photo by Sarah Marquet.
Lake Roxburgh walkway, a popular running, walking and mountain biking track that runs down the true left of the Clutha River, has been closed until further notice as a safety precaution because of blasting work during construction of the Roxburgh Gorge cycle trail on the other side of the river.

Cycle trail trust member Malcolm Macpherson said the closure was a preventive measure undertaken by John Sutton Contracting, in consultation with the landowner and the Department of Conservation (Doc).

Doc Central Otago manager Mike Tubbs said he had agreed to the closure to "ensure safe blasting", but he was "currently working with the trust to get a more limited or restricted closure".

About a week before Christmas last year, Samantha Rule, of Clyde, was running in the area of the walkway. She had seen signs warning of the blasting and knew of the precautions put in place by contractors, such as buoys in the water and horn blasts before and after the work.

Despite that, she said she was caught in the blasting "exclusion zone", which is between the two red buoys in the river, when a charge went off.

She said she was immediately opposite the blast, about 50m from the blast site, and had not heard the warning horn.

She said she then went to the police, the Central Otago District Council and later the Department of Labour with her safety concerns.

Council planning and environment manager Louise Van der Voort said council staff had had conversations with the chairman of the trust about construction and health and safety procedures and were satisfied the consent holder was operating within the conditions of resource consent.

A spokesperson for the Department of Labour confirmed a complaint was received and said health and safety inspectors had "discussed safety issues relating to the blasting with the company and asked them to ensure the safety of people in relation to the blasting work.

"Changes have been made by the company which includes closing off the trail during blasting."

When approached by the Otago Daily Times yesterday, project manager Tim Dennis confirmed the Lake Roxburgh walkway had been closed for "safety reasons" but declined to comment further.

Mr Macpherson said the Department of Labour had "reviewed John's work processes and agreed that he has taken all practical steps to ensure public safety".

"He is adhering strictly and consistently to the audible warning processes".