We haven't got a dog's show 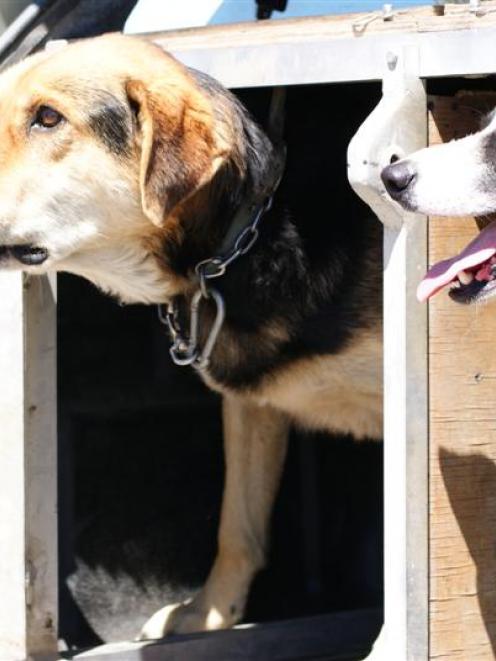 Photo by Sarah Marquet.
Huntaway Rock and heading dog Mitch were keeping keen eyes on their competition on day one of the Lowburn Collie Club centennial trials yesterday.

The dogs were just two of the four being run by sheep and beef farmer Steve Wallace, of Clinton.

Speaking after a run, which had involved his heading dog, Craig, racing to the top of the hill, gathering three merinos, herding them back down and then, ideally, bringing them to a stop in a ring, Mr Wallace said merinos ''can be a bit stuck up''.

Seven-year-old Craig, or granddad as Mr Wallace sometimes yelled at him, had made a near perfect run up the steep hill but was involved in a standoff with the sheep at the top which lost them precious time.

The run had to be completed in 15 minutes and Craig, a previous national competition winner, was just coming off the hill when the judges called time.

''It's very frustrating. He's an older dog and he knows what he's doing so he gets careful with sheep like this. Merinos can be a bit stuck up some times, it's just the way they are,'' Mr Wallace said.

Club secretary Claire Davis said between 40 and 50 men competed over the four events yesterday, most running more than one dog.

To mark the centenary, special one-off trophies will be presented at a dinner at the Moorings tonight.