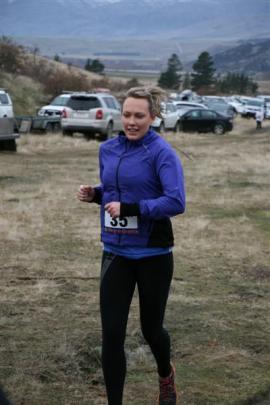 Courtney Smith, of Cromwell, makes a run for the finish after completing the 10km cross country run. Photos by Liam Cavanagh. 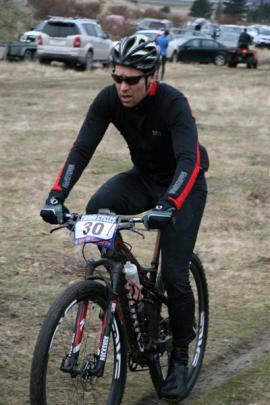 Mike Daish, of Queenstown, during the third leg of the 40km mountain bike track.

The cold winter blast did not stop people from jumping on their bikes for the Winter Quest mountain bike and cross country on Saturday morning near Cromwell.

Up to 200 men women and children, including tourists from Oregon in the United States and Vietnam, joined the 40km bike and 10km race at Mt Pisa.

Race organiser Nigel Lines said the day was ''awesome'' and everyone enjoyed themselves, despite the weather. As well as the races, participants and spectators enjoyed wine tasting, food, and a DJ and many kept warm beside one of the braziers.

Each race entry was supporting the Otago Suicide Prevention Trust and winners received medals and spot prizes, including a portable spa pool and a child's bike.

Mr Lines did not know how much the event had raised for the trust but said it was at least $500. Canterbury farmer Siona Collier, of Sheffield, completed the mountain bike race after an initial fall that briefly held up the race.

Mountain biking was an ''investment in my health'' and coming down to the area for the weekend was more than just recreation, she said.

Cromwell resident Courtney Smith said it was her first time at the race and the best thing about the track was the scenery, after completing the running race in just over one hour and 15 minutes.

It was quite challenging with the terrain, rocks, stream and it was ''quite slushy'', she said. Mr Lines said organisers were planning a summer race that would include a half marathon and a duathlon.

''We are also going to keep the fundraising for suicide prevention.''

People were ''scared'' to talk about suicide in this country and he hoped he could make people more aware of the issue, he said.

Full results will be available online this week at www.questfarm.co.nz.

Where to seek help