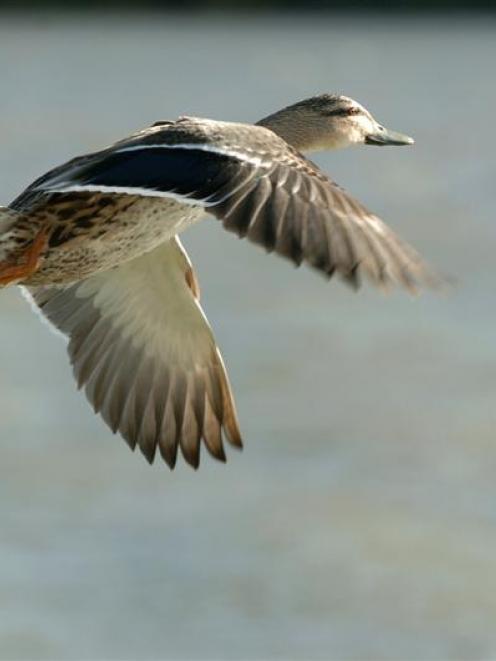 Healthy duck numbers could lead to a "vintage" opening weekend for Otago shooters, but only if the forecast for settled weather changes.

The duck-shooting season begins tomorrow and runs until June 1, but it is the opening weekend which draws hundreds of shooters to ponds and wetlands around the country.

Fish and Game Otago operations manager Ian Hadland said there had been a good breeding season and a damp spring, which produced high mallard numbers.

"There should be an abundance of ducks, and coupled with landowners growing more grain this year [that] means good hunting. It should be a better than average year."

He would have been predicting a "vintage season" were it not for the forecast of reasonably cool, calm, clear weather on Saturday.

In windy, southerly conditions they were closer to the ground.

In calm conditions, shooting success could be improved by adding movement to decoys, he said.

"It's great to see people out there really looking forward to this weekend of the year.

"It's a very special time for most Southern men and women."

Licence sales were steady, and shooters were reminded to have their licence with them.

Mr Hadland said seven ranging teams would spread out across the region, speaking to shooters to ensure they had a licence, were using the correct ammunition and were not shooting protected species.

The daily bag limit for shoveler ducks was two and for mallards 25.

New Zealand Food Safety Authority animal products programme manager Jim Sim said the main risk to shooters was bacterial contamination, which was usually the result of poor handling or bacteria on the bird, he said.

"Remember, the duck you eat tonight may have been swimming in an oxidation pond this morning."

To reduce the risk of foodborne illness, it was important to remember basic food safety practices, he said.

• Duck-shooting opening on the Waitaki River will feature an unusual event - a flood.

Kurow-based Fish and Game officer Graeme Hughes said it was the first year in "30-odd years" he had seen a flood for opening day.

Mr Hughes said the flood was a "disaster" for many shooters who usually shot on the Waitaki, and he guessed more than 100 would be affected.

Their hides would be gone, and finding an alternative spot at short notice would not be easy.

Otago Fish and Game said yesterday other Otago rivers were likely to be at normal levels, but fine weather forecast for tomorrow would make shooting big bags difficult for hunters. Northwest winds were expected tomorrow afternoon.