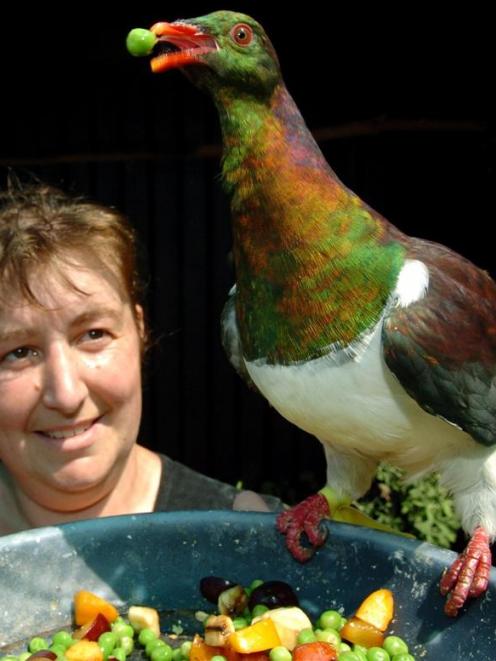 Nik Hurring of Project Kereru and one of the beneficiaries of her work. Photo by Stephen Jaquiery.
Nik Hurring has spent many hours looking after injured and sick kereru. Rebecca Fox talks to the winner of the 2008 Otago Conservation Awards - Coastal.

It is a rescue mission that has gone from the back shed to two purpose-built aviaries - all due to the passion Dunedin woman Nik Hurring has for the kereru.

Project Kereru aims to rescue and rehabilitate injured native woodpigeons so they can return to the wild.

Ms Hurring was nominated for her work by fellow Project Kereru worker Liz Green and Department of Conservation Coastal Otago officer Mel Young, who said she volunteered her time "24-7", sometimes getting up every three hours to feed a bird.

Her reaction to the nomination was modest.

"It's a surprise. It is not about me; it's about the birds.

"It is a privilege to help them, to work so close to them."

It all began in the early 1990s when, as a vet nurse, she helped her employer look after the wildlife brought into the practice.

When he moved on, Ms Hurring continued the work, especially with native woodpigeons.

"They are amazing birds. So many that come in need help."

Initially, the injured birds were housed in the garden shed at her parents' house, then at her own home before she approached Forest and Bird for help.

Funding from Forest and Bird and the Marjorie Barclay Trust enabled the first aviary to be set up at the Dunedin Botanic Garden.

Other assistance came from public offers and companies such as Watties which once donated 600kg of supplementary feed.

Then more recently an aviary had been set up at Green Island, which had enabled many more birds to be looked after.

Increased awareness of the birds and their need for help meant numbers recuperating in the aviary had increased over the years.

"There is always something to be done up there."

It was seasonal, with summer the busiest months although recently about nine birds were brought in but most either died or had to be euthanased.

Generally, survival to release was about 60%.

"It was getting disheartening at the number we were losing but you can't win them all. It's all the more special when you can release them."

Two friends helped with the daily feeds and regular cleaning of the aviaries.

It also took a lot work to help the birds, especially teaching them to recognise and eat the supplementary feed.

However, sometimes the tough decision had to be made to euthanase a bird that would never heal enough to go back into the wild.

Word of her work was spreading, with calls coming from as far afield as Taranaki and Haast from people seeking help for injured kereru.

Those birds helped by the project for the past two years had been banded with individual identification numbers so their progress could be tracked.

In that time, only two birds had returned to the aviary which showed most were learning from their experience, she said.