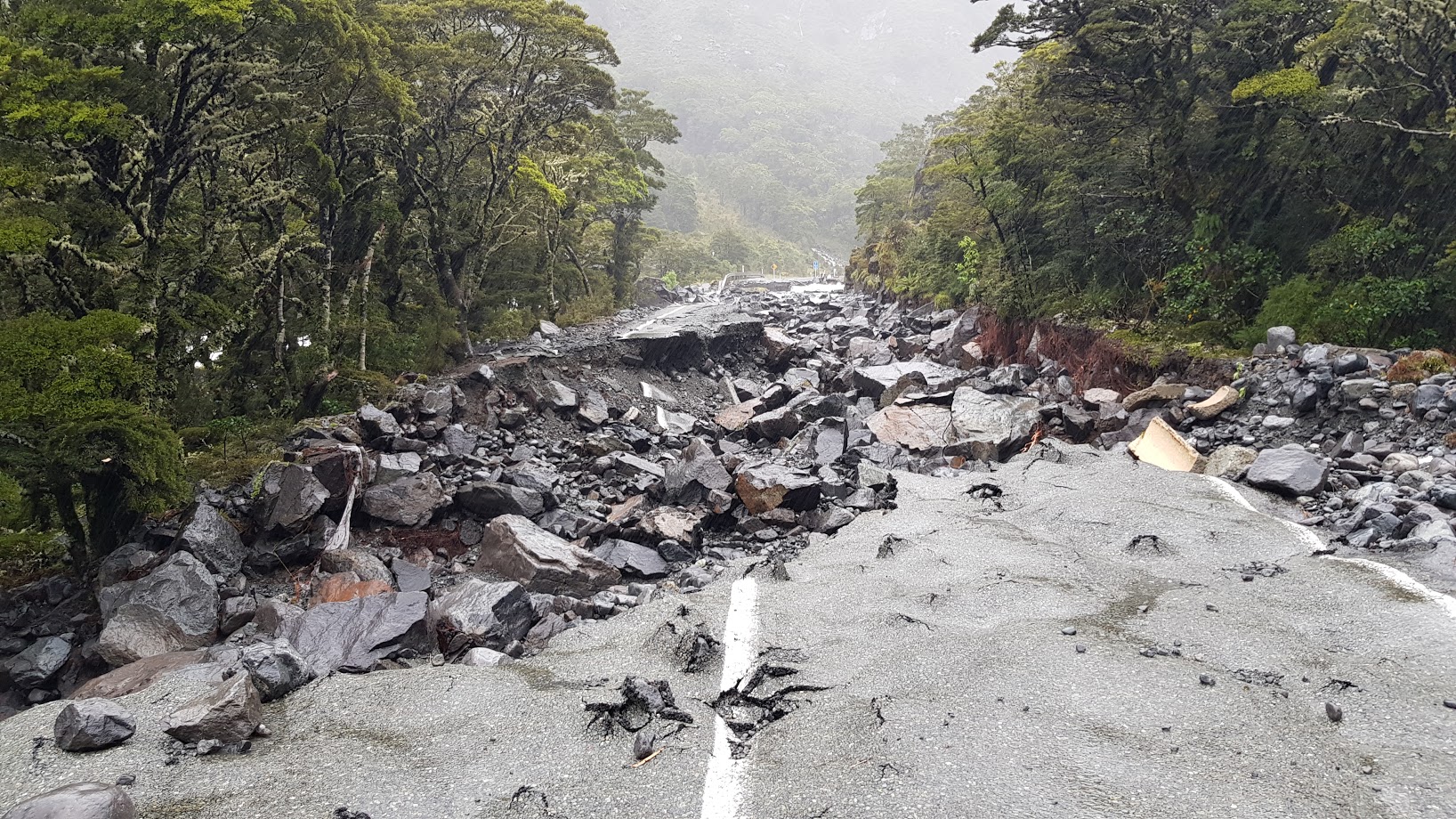 Flooding damage on State Highway 94 in Fiordland. Photo: Dylan O'Neill/NZTA
A state of emergency has been declared in Fiordland after flooding cut off the only road out of Milford Sound, leaving more than 380 people stranded.

State Highway 94 between Te Anau and Milford, dotted with slips and flooding, is closed and expected to remain so for several days.

The visitors' carparks and terminal in Milford Sound are flooded and staff are monitoring ponds in the area.

The NZ Transport Agency said the highway - the only road in or out of Milford Sound - could remain closed until the end of the week. The next update was not expected before 1pm tomorrow.

Southland Mayor Gary Tong signed off on the state of emergency at 1.40pm today and said it applied to Milford, Te Anau and Manapouri.

Several vehicles have been spotted on SH94 and emergency services would be flown into the area to check on the occupants.

The Milford Track was cleared during the weekend, but Tong said people may be on other tracks in the area.

Emergency Management Southland controller Angus McKay said the 382 people in Milford Sound, including staff and visitors, were either in Mitre Peak Lodge or on the tourist boats.

"They have plenty of food and are safe and warm," he said.

"The Cleddau River and high tides had caused flooding this morning and staff were monitoring the expected rainfall and tides throughout today and tomorrow, when more heavy rain is expected in the early morning.

MetService is warning heavy rain could cause major slips after upgrading the warning level for parts of Fiordland and Westland.

There are warnings and watches for heavy rain across much of Otago and Southland, but the area expected to be most affected is Westland and Fiordland south of Hokitka where the MetService has upgraded the warning level to a "red warning" from orange. 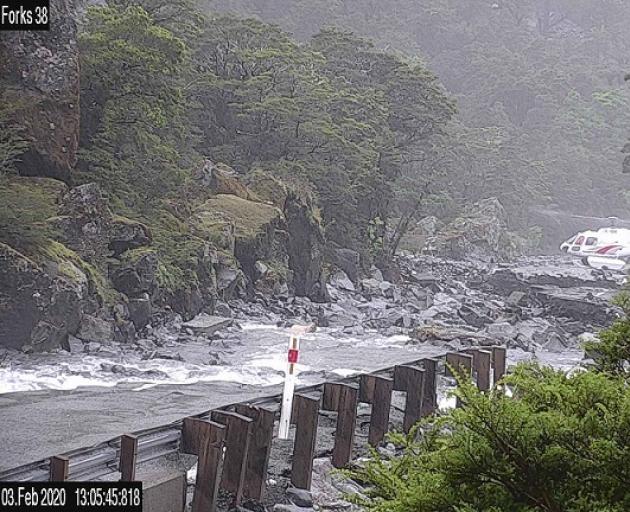 SH94 was closed earlier today between Cascade Creek and West Gate (the Chasm).

NZTA journey manager Peter Brown said a small number of tourists were taken by helicopter out from Forks Bridge about 1.5km from the Homer Tunnel.

A bus load of 27 people were expected to be airlifted out at Hollyford Rd ''in the next hour or so''.

''There is extensive damage from Lake Gunn to the Homer Tunnel which will delay us opening this road quickly and there is still a section we haven’t inspected due to bad weather preventing a fly-over.''

An Emergency Management Southland spokeswoman said groups were being evacuated from Gunn's Camp after water made its way through the camp.

The Milford Road Alliance said earlier flooding was causing "significant damage" in the area, with rainfall rates of 55mm an hour.

The alliance was checking the road for vehicles. 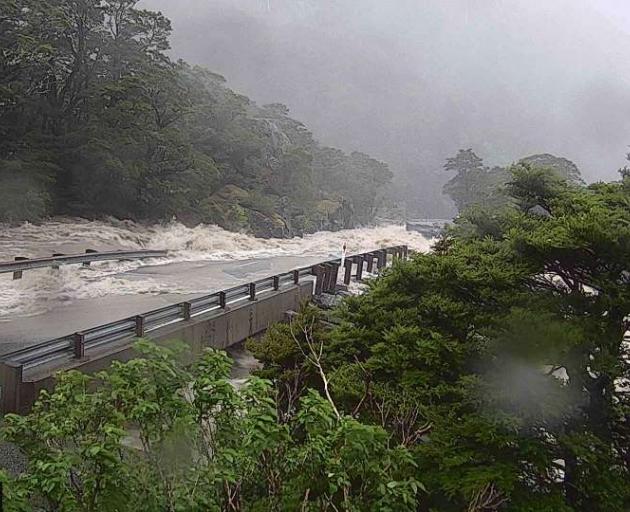 MetService said the event had high potential for "further significant impacts, such as major slips, road closures and flooding, in the next 24 to 36 hours.

A series of fronts was forecast to move east across the South Island from yesterday morning through into tomorrow afternoon, bringing periods of heavy rain to the west and the south of the South Island and strong west-to-northwest winds to parts of southern and central New Zealand.

A MetService spokesman said a a heavy rain warning is in force for Fiordland, Westland, the headwaters of Otago Lakes and Rivers, Southland and Clutha.

The heavy rain watch for Central Otago, the Southern Lakes and the headwaters of the Canterbury lakes and rivers have now been upgraded to an orange warning. Watches for heavy rain have now been issued for Dunedin and Buller.

In the headwaters of the Otago lakes and rivers, up to 450mm of rain is expected to accumulate near the main divide, and up to 280mm is expected within 15km east of the divide until 1pm tomorrow.

Low-lying areas in Fiordland were evacuated this morning due to flooding.

A police spokeswoman said police were notified of the flooding in Gravel Pit Lane in Fiordland National Park at 9.10am.

Those who had been evacuated were being directed to the assembly point at Mitre Peak Lodge in Milford Sound.

Milford Sound Lodge posted on Facebook that their guests were also safe and well.

"You may have heard Fiordland is currently experiencing high rainfall and the Milford road is currently closed ... Certainly, an interruption to travel plans and business as usual, but the main message to family and friends is everyone is safe and being well looked after," the post said.

The Otago Regional Council said this afternoon it was monitoring the effects of rainfall on lake and river levels around the region.

ORC Duty Flood Officer Lauren Hunter said Lakes Wanaka and Wakatipu were rising and sitting at 277.6m and 310.2m respectively. These levels were higher than normal, but no cause for alarm. Neither lake was expected to reach flood levels.

River flows were also rising and the council was paying close attention to the Dart and Pomahaka rivers in particular, which are above high flow thresholds.

With the heavy rain forecast, the road is likely to remain shut for the rest of the day. Council has said it will provide further information and updates when it can.

The highway between Fox Glacier township and Haast in South Westland reopened this morning after rain washed out a culvert at Thirsty Culvert late yesterday.

An NZ Transport Agency spokesperson said SH6 was closed shortly after 5pm yesterday but reopened at 9.30am today.

In Westland (from Harihari southwards), up to 500mm of rain may accumulate about the ranges, and up to 160mm near the coast until 2pm tomorrow.

Peak rates throughout these regions were generally expected to be up to 25mm an hour and up to 35mm to 40mm if there were thunderstorms, he said.