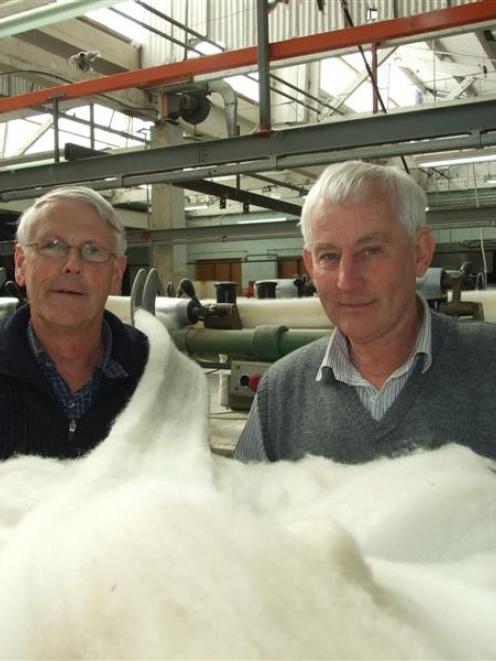 Bruce Woollen Mill managing director John Stevens (left) and Wool Equities Ltd chairman Cliff Heath examine some undyed wool at the mill in Milton. Photo by Helena de Reus.
Milton's historic woollen mill is a hive of activity as its owners shift and replace machinery and plan for its expansion.

Some of the plant's machinery has been sold, and Bruce Woollen Mill Ltd has spent more than $500,000 on several other machines from Australia to help produce a greater range of products.

Bruce Woollen Mill managing director John Stevens, of Christchurch, said much work had taken place over the past eight months.

And next month, seven container-loads of machinery would be shipped from Australia.

The ''near-new'' equipment would make fine worsted yarns for the knitting industry and was expected to arrive at the end of May.

Mr Stevens said new machinery would allow the mill to offer a wider range of products and develop new industries.

It would produce wool and wool-mixes and make specialist yarn.

Half the new equipment arrived at the mill three months ago, to improve combing, and replaced machinery sold to Ashford Handicrafts Ltd in December 2011, after the Ashburton company bought a production line and hired four QualitYarns staff.

The mill employs 28 people - about half of these former QualitYarns staff - and Mr Stevens hopes to boost staff numbers as the company expands.

In November 2011, the mill seemed set to close when QualitYarns issued redundancy notices to its 28 staff, but in April last year Christchurch-based Wool Equities Ltd, as part of a consortium of New Zealand businesses, bought the plant, saving the mill from closure.

''It's the critical difference - quality and origin.''