‘They just mistreated her so badly’ 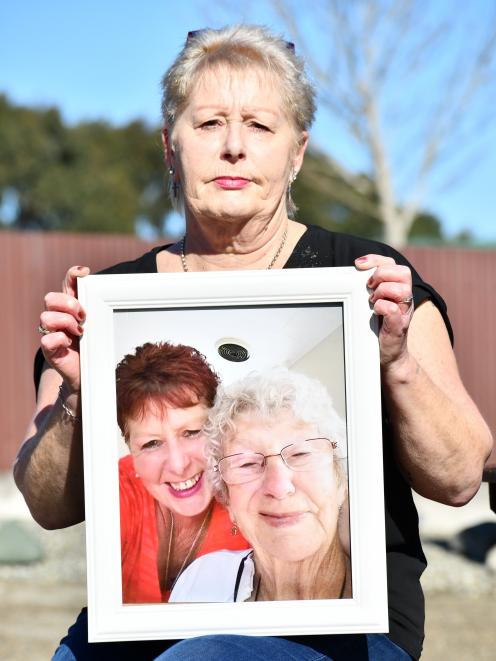 Joanne Watson, holding the last photo taken of her and her mother Nancye MacKenzie, says the Health and Disability Commissioner’s findings on her mother’s death in 2018 have not brought any closure. PHOTO: LAURA SMITH
A Southland woman is still not over the way her mother was neglected before her death at Oamaru Hospital.

‘‘They just mistreated her so badly, and she didn’t have to die like that,’’ Joanne Watson said.

Ms Watson, of Invercargill, and her family now had some answers after a Health and Disability Commissioner’s (HDC) report, released on Monday, identified some systemic failings in the hospital’s care for her mother, Nancye MacKenzie.

The hospital’s name was omitted from the report, but Ms Watson confirmed it was Oamaru Hospital.

The 83-year-old was admitted to hospital on March 13, 2018, and later diagnosed with salmonella.

The family was not notified immediately of her death, and only found about the fall during the reporting process.

Health and Disability Commissioner Morag McDowell’s report found failings in the care provided by the hospital, and two of its doctors, referred to as Dr C and Dr D in the report. Both no longer work at the hospital.

While it was not possible to determine whether her death could have been avoided, the overall care was well below an acceptable standard.

The report said Dr C’s standard of care fell below the expected standard to a ‘‘serious degree’’. The doctor did not conduct appropriate daily clinical examinations, failed to appreciate Mrs MacKenzie was becoming more unwell and had poor documentation.

The hospital had a ‘‘significant number of concerning systemic issues’’ in 2018, resulting in a poor standard of care.

Assessments of Mrs MacKenzie being a fall-risk patient were inadequate, and management of her transfer from the emergency department to the ward and deterioration was poor.

In 2017, the hospital underwent an independent review, which found clear lines of responsibility needed to be established. But the hospital, and staff, could not agree on who had been responsible for Mrs MacKenzie’s care, the report said.

‘‘The lack of clarity was known to the hospital, and was an unacceptable situation that resulted in both doctors believing the other had clinical responsibility. The potential for this lack of clarity to affect the clinical safety of [Mrs MacKenzie] was very real and highly concerning,’’ the commissioner said.

Ms Watson said her family had to care for her mother in hospital, including taking her to the toilet.

Drs C and D had sent the family apology letters.

Since Mrs MacKenzie’s death, the hospital had made ‘‘extensive changes and improvements’’ to its processes, especially under its new leadership team, the report said. It was recommended the report be used for staff training.

While the report had not brought full closure, it made the family realise the hospital understood it had made errors, Ms Watson said.

Chief executive Phil Jamieson referred questions about the report to the HDC. Mr Jamieson was not working at the hospital at the time of Mrs MacKenzie’s death and was appointed as chief executive last year.

A spokesman for the HDC said the commissioner ‘‘carefully balances the right to individual privacy with the need to hold providers accountable’’ and while the name of the hospital was omitted from this report, complainants were able to comment on it publicly if they wished to.