65 happy years together pass in flash 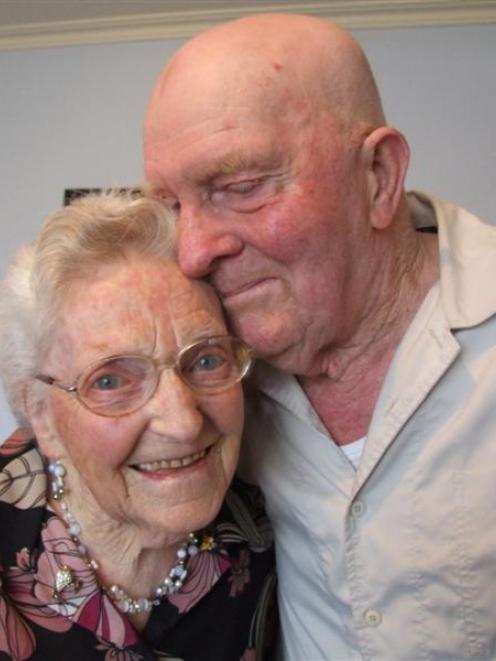 Alison and Jim Phillips celebrate their 65th wedding anniversary in Oamaru yesterday. Photo by Sally Rae.
A meeting at the Dunsandel Railway Station led to 65 years of marriage for Jim and Alison Phillips.

Young Miss Stewart was on her way to visit Mr Phillips' parents and she was met at the railway station by her future husband, a rabbiter and shearer.

While Mrs Phillips (87) laughed yesterday and said it was not love at first sight as far as she was concerned, Mr Phillips (88) said she "looked all right to me".

The couple were married at St Paul's Church in Oamaru on March 16, 1944 and their reception was held at the Star and Garter.

They returned to the Star and Garter yesterday for a celebratory meal to mark the blue sapphire anniversary.

Due to World War 2, newlyweds were not allowed to travel more than 50 miles (80km) from where they were married so they went by train to Studholme and spent their honeymoon in Waimate.

Their first home was at Ardgowan and they used this as their base when they lived in tents in rabbit camps at Waitangi Station and Ribbonwood Station.

They then moved to Kurow and managed a farm at Lake Waitaki and later moved to Reidston to a small farm.

The couple retired to Oamaru about five years ago and moved to Sandringham House Rest Home in January last year.

Both agreed patience and perseverance were key factors in a long and happy marriage.

They also agreed the years had passed very quickly.