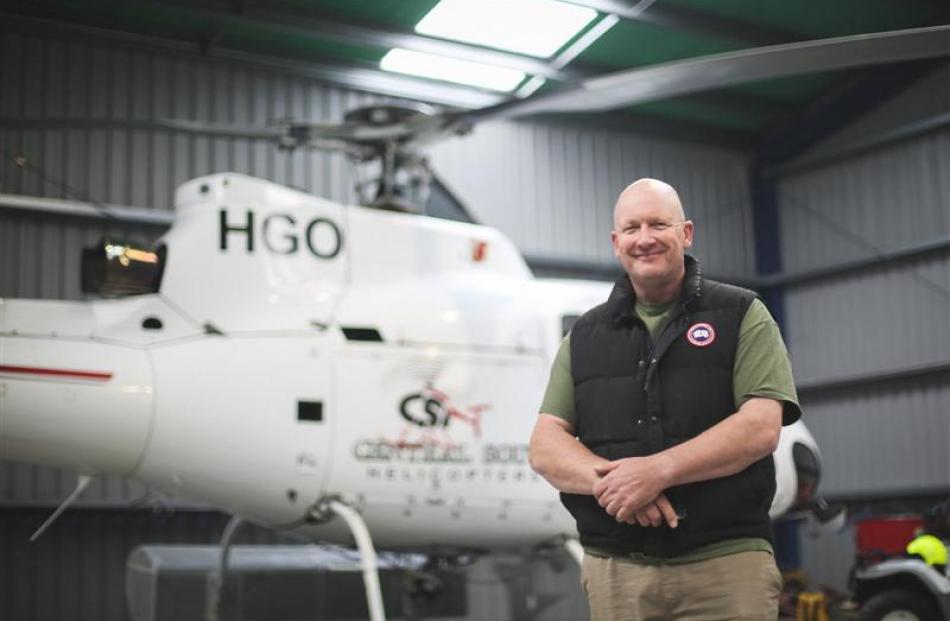 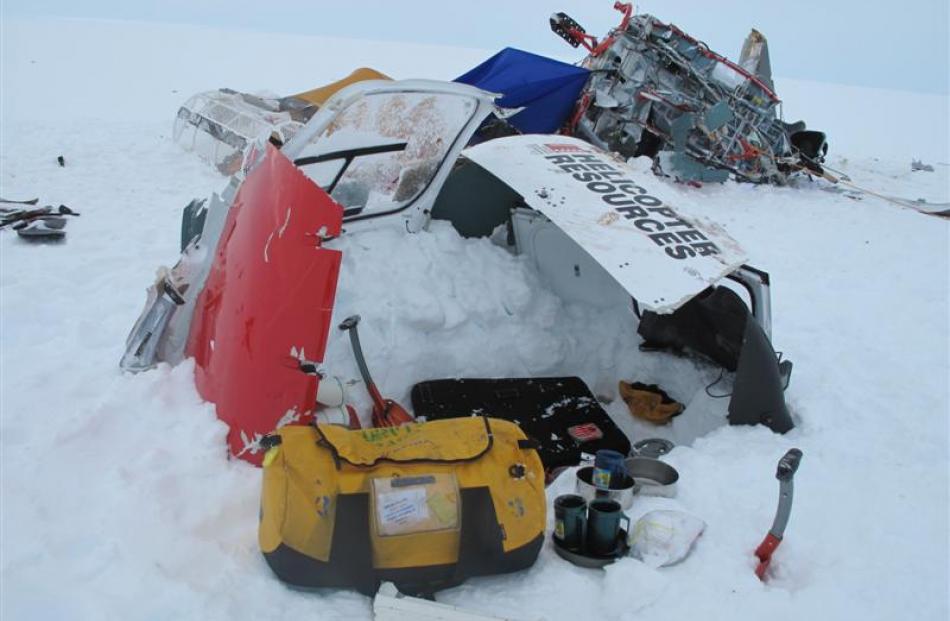 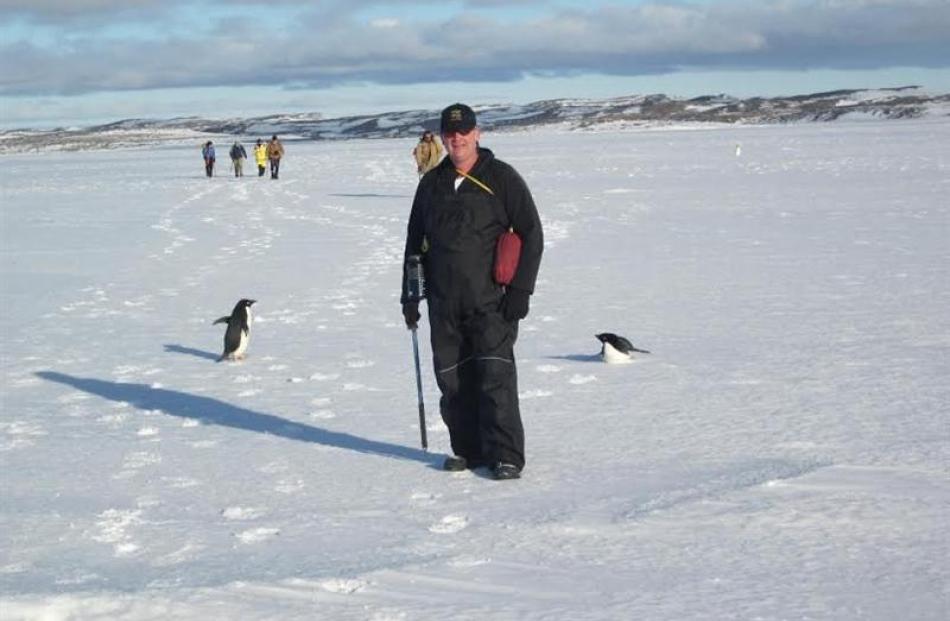 Mr Oakes takes an evening stroll in the Antarctic. 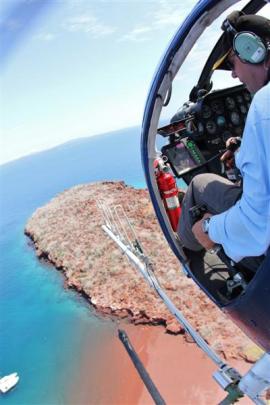 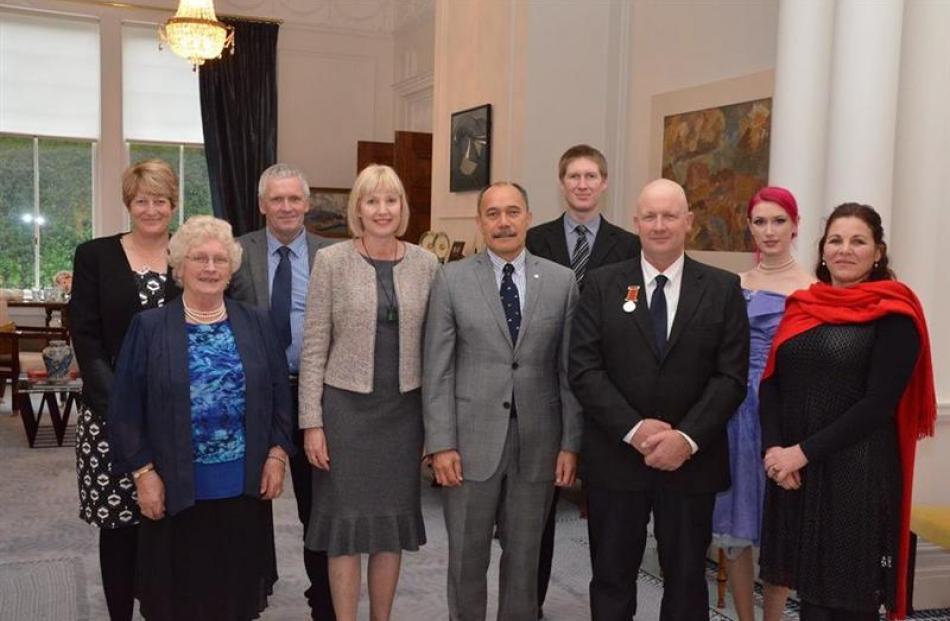 Last week, Central South Island Helicopters owner and pilot John Oakes was presented with a Royal Humane Society medal by the Governor-General, recognising his bravery in going to the aid of three people seriously injured in a crash in the Antarctic. Rebecca Ryan finds out more about the Herbert-based pilot.

On December 1, 2013, John Oakes saw the helicopter in front of him crash in a remote, heavily crevassed area in the Antarctic.

Mr Oakes was flying the other of two helicopters returning from a mission to survey a penguin colony.

Landing about 15m away in whiteout conditions, about 240km from Davis Base, Mr Oakes turned to his passenger and said:

''I hate to say it, but I don't think anyone could've survived that.''

Then they saw movement.

One woman crawled through the snow away from the wreck and the pilot also appeared.

The other Australian expeditioner was found trapped in the wreck, hanging upside down, held by her seatbelt, with her foot caught in the seat panel.

They had all suffered serious injuries and Mr Oakes raised the alarm.

Two aircraft arrived overhead within an hour and a-half, but due to the deteriorating weather and the surrounding area of bad crevasses, they were unable to land and returned.

Frequent snow showers and blizzard-like conditions continued as Mr Oakes and his passenger tended to the injured, making sure all the three were protected from the elements, one in a bivouac shelter and the others in the rear of Mr Oakes' helicopter.

They waited on the ice for 20 hours before there was a suitable weather window to fly to Sansom Island, where another plane was waiting to help return the injured to Davis Base.

He took two of the injured there, refuelled and returned to the crash site with a doctor and an engineer on board.

On the return to Davis Base, storms started to hit again, Mr Oakes said.

Arriving at Davis Base, Mr Oakes was totally exhausted at the end of what had been a harrowing 36-hour stretch and said it was his 28 years of North Otago Search and Rescue experience that had kicked in to get him through.

Last week, he was presented with a Royal Humane Society medal for his efforts in the rescue, which was a ''pretty humbling'' experience.

The medals are given for acts of bravery in which rescuers put their own lives at risk to assist others whose lives are in peril.

Mr Oakes said he was ''just doing his job'' - he was in the Antarctic, working for the Australian Antarctic Division, as helicopter support flying people to isolated places to assist in scientific studies.

Mr Oakes' involvement with helicopters dates back long before he became a pilot.

He started in live capture of deer in the 1970s as a netter.

That work took him Queensland, Australia, where he was involved in a live capture programme in the early 1980s.

When he returned to New Zealand, he decided to make the shift to the pilot's seat.

''I started my helicopter training in [Te Anau] in '82 and I didn't have a full licence until '88 because it was just a money pit. I had to get the money together.''

But it was the launch of what has been an impressive career, and he has flown full-time since.

''It's been everything since then really, daylight until dark,'' he said.

It was his pest control skills, dating back to the ''deer days'', and knowing the right people, that landed him the opportunity to be the lead pilot for the Macquarie Island pest eradication project in 2011, the largest and most remote pest removal scheme of its kind ever undertaken.

He led the group of pilots, ground crew and engineers for the start of the project, which was last year declared to have successfully rid the island of rats, mice and rabbits.

Mr Oakes has also worked in pest eradication in the Galapagos Islands.

He helped to bait 10 small islands in the Galapagos and was joined by wife Bruna, who helped as ground crew.

''They have all been successful to date, one [island] has been re-infected where [rats] have been able to swim back to it, but all the others have stayed clean and all of the natives have come back in abundance, so they're really thrilled,'' he said.

Both projects had given him invaluable experience, and now, he encourages his staff to take any opportunity for any international work.

Central South Island Helicopters Ltd, based at the Ross Rd property Mr Oakes bought at age 19, now employs between seven and 20 people, depending on the season.

One of his pilots is in China at present, and two others have recently returned from South Georgia, in the South Atlantic, doing pest eradication work.

''I think it's really good for the boys. It makes us [as a team] a lot better, a lot more qualified for what we do around here,'' he said.

His business has also become somewhat of a family affair - his wife Bruna and nephew Dion work in administration and his younger brother Gary is now flying full time.

''Gary's been working with me, on the support side of it, right from day dot and he's just started flying in the last few years.

''I've just really made it a passion to have a good rescue callout facility for our region,'' he said.

From the cockpit of a helicopter, he has helped rescue a countless number of people from the sea and the mountains around North Otago.

Firefighting has also become an integral part of his business and the company's new 2000-litre capacity monsoon bucket, is the biggest available in the South Island.

Mr Oakes, now 57, has developed a diverse range of skills and clocked up thousands of flying hours in the past 30 years.