Fenwick School on Oamaru’s South Hill. Photo: supplied.
The board chairman at Fenwick School has apologised for minimising the level of opposition to religious instruction in schools.

When Damien Goodsir, who is also a pastor at Oamaru’s House of Breakthrough, spoke to the Otago Daily Times last week about independent school governance consultant Cleave Hay’s report into religious instruction, chaplaincy roles and possible conflicts of interest at the school, he said: "Other than these two parents that are complaining, the majority of everything else is going really, really well."

When the report was made public last week  it showed about 17 out of the school’s 213 families or "around 8% of the Fenwick community are opposed to religious influences at the school". 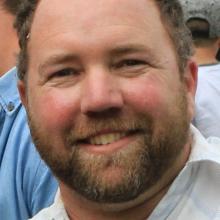 Damien Goodsir.
Mr Goodsir could not be reached for comment on Thursday to speak about the discrepancy, but yesterday he emailed a statement to the ODT, which he said was to be distributed to parents.

"I was wrong, and it should have read (sic) ‘some’ parents. I am sorry for any offence this has caused any parents of the school."

The ODT was contacted by two parents with children at the school and a secular education campaigner last week who took issue with Mr Goodsir’s remarks.

One parent, who asked not to be named, said Mr Goodsir had lied. She asked if the school had offered to correct Mr Goodsir’s remarks.

"There are plenty of parents with a copy [of the report] who would probably be quite happy to have the record corrected," she said.

"It is really difficult for the parents at the school [to speak publicly about their concerns]. It’s not like we don’t want to say anything — believe me we would love to — but to put our names on the record, in the paper and so on, not only would we become a target but our children would as well, and we can’t risk that.

"It’s a pretty contentious subject. And of course there’s a lot of people who just want it to go away, and I understand that as well. It’s for the good of the school, but unfortunately what Mr Goodsir has said has sort of backed it all up again. And that’s really unfortunate."

Last year, prior to Mr Hay’s report, Mr Goodsir was publicly questioned for a sermon he gave saying "sports teams ... boards ... businesses ... clubs or groups, neighbourhoods, workplaces, schools or churches ... all need to be infiltrated with the kingdom of heaven".

He told the ODT  at the time he regretted his choice of words.

After the school board received Mr Hay’s report it enacted a raft of changes and Mr Goodsir stepped away from his roles in religious instruction and chaplaincy at the school.

"Some parents openly shared that they will not desist until RI [religious instruction], in particular, is removed entirely from the school, which will likely mean ongoing work for the complaints handling committee, but the board, through sound and fair governance process, must ensure their focus is not distracted from students’ educational engagement, progress and achievement."

Principal Lloyd Bokser could not be reached for comment.

Sad that children are being denied knowledge of the Bible. As we see our country become more secular the morals of the country are going down as people discard the Bible. The Bible is the hand book of life and that is why we have a generation of angry young people who have no guide lines in life so we have over crowded prisons.

The Bible condones rape, slavery, genocide, infanticide, murder and subjugates women. I think I'll teach my Daughters better morals than that thanks!

There are probably a lot of people who will read this article and put it down to an over-reaction by a small group of "trouble-makers". But remember, that while 17 families have been brave enough to oppose RI classes openly, over half of the families at Fenwick have shown their disfavour of RI classes by opting their children out of them.

I say these families have been "brave" because it is difficult to say anything in opposition to religious instruction without experiencing the Christian value of "shunning". (See Matthew 18:15-17)

This can be especially harsh in smaller communities where local church members can have an out-sized influence on the local primary school. It's ok for them to insert their religious faith into your child's secular school but it's not ok for you to question it... and social shunning is likely to occur if you do.

The full report from Cleave Hay can be read here: https://religiouseducation.co.nz/full-independent-report-regarding-ri-cl...

We have an admission that the aim should be to infiltrate school boards to achieve a hazy stated objective that is inconsistent with secular principles. Additionally now, there has been an attempt to minimize the level of objection to this.

Is the hidden objective to simply grow a congregation, grow revenues? It looks like a conflict of interest. The chairman of the board is a professional believer, needing more amateur believers to grow the business