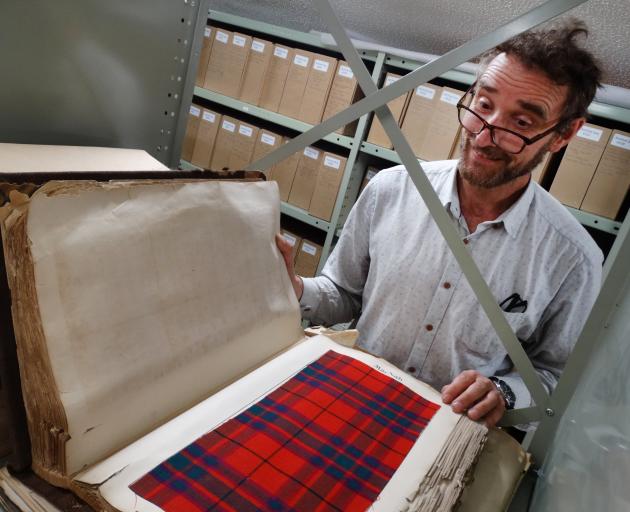 Taking a peek at an old Oamaru Woollen Mill tartan sample book is Waitaki Museum and Archive curator Christopher Meech. PHOTO: RUBY HEYWARD
After spending the past 12 years in Oamaru archiving the Waitaki district’s treasures, Christopher Meech is taking his talents to the Hocken Collections in Dunedin.

To him, the job was much more than filing old dusty stuff — it was about finding untold stories.

"Sometimes the boring things are the most fascinating."

He enjoyed how the cataloguing crossed many different disciplines and the relevance it had to the community for memories, evidence, and accountability.

Navigating the world of directories and classifications required a special type of lateral thinking — something he put to use when connecting people to resources, whether it was for their work, personal or emotional needs.

It documented records of stone quarrying industry within the district and showed how it was operated.

"It’s like working in a warehouse of cool stuff."

Access to treasure-like primary sources was a privilege, but in its delicacy needed a certain protection, Mr Meech said.

This often led to a tension between public access and preservation.

During his time at the Waitaki Museum and Archive, he relieved this tension by bringing the museum and Forester Gallery collection into a digital arena, improving public access and "extending the boundaries of the archive".

"It comes to life every time people look at it."

Equipped with a degree in maths and philosophy, he worked for the United Nations, taught English in China and Laos, before pursuing Library Studies at Otago University.

"Young people should consider libraries and information management as a job. It can lead to some very interesting and rewarding places."

Mr Meech worked as the reference and heritage librarian at Waitaki Public Libraries before taking up a position as the archive curator for the Waitaki Museum and Archive.

In his new role at the Hocken Collections as head curator of publications, he would lead a small team in looking after published material such as maps, books, local government documents.

He was looking forward joining one of the "leading archival institutes in Australasia". He will start on February 15.