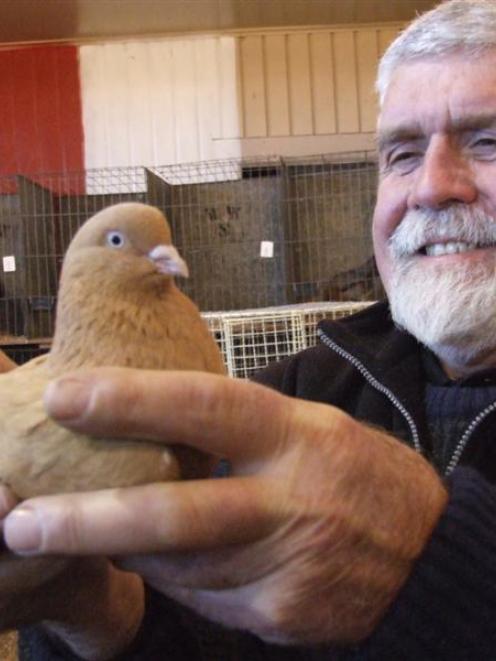 Mr Saunders, who is in his 60s, has made the long trip south to exhibit at the Oamaru Poultry Pigeon and Canary Society's 125th jubilee show at the Drill Hall in Itchen St.

The society is also hosting the first New Zealand Poultry Pigeon and Cage Bird Association national show to be held in the South Island.

It is open to the public from 2pm to 5pm today, 9am to 5pm tomorrow and 9am to midday on Sunday.

Mr Saunders, who has been showing birds since 1979, said coming home from work and feeding his pigeons was therapeutic.

"That way, I don't have to have stress management," he laughed.

He has about 120 pigeons and keeps five breeds - West of England rollers, short-face tumblers, performing tumblers and modenas.

While Mr Saunders enjoyed exhibiting his birds, he was not fiercely competitive - "I'm not that aggressive; I'm too soft by nature" - but enjoyed meeting others with a shared interest.

He exhibited at shows around the North Island, including his local Hastings show, and it was his first time exhibiting at Oamaru.

More than 1600 poultry, bantams, pigeons, ducks and aviary birds are on display at the show, a massive increase from the society's first show, which was held on August 28, 1885, and attracted 316 entries.

A school art project was held as part of this year's show, with prominent North Otago artists helping pupils prepare murals which will be on display in the hall.