Boast of burning down house realised 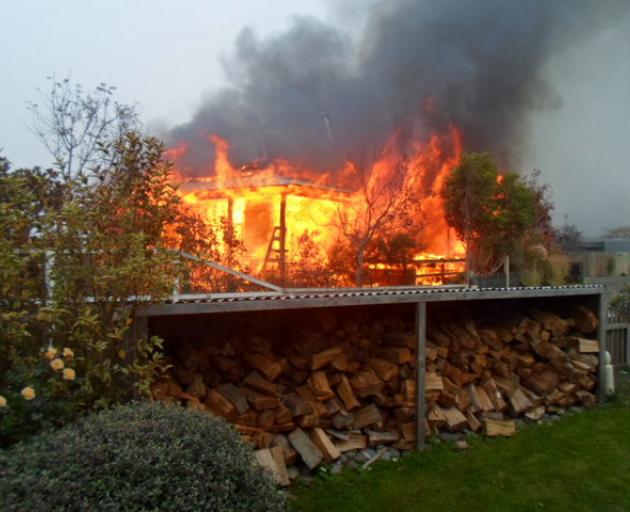 The Riverside Village home was destroyed by the deliberately lit blaze. PHOTO: SUPPLIED
A Glenavy man who boasted to patrons at a pub he was planning to burn a house down stayed true to his word.

Michael William Meredith (35) appeared before Judge Joanna Maze in the Timaru District Court yesterday where he was sentenced to 18 months intensive supervision and ordered to pay $550 reparation, having earlier pleaded guilty to a charge of arson.

The court heard at previous appearance that Meredith rented the property north of Oamaru from his mother.

Four days before he lit the blaze that consumed the two-bedroom home, Meredith set off a fire alarm, which he alleged happened after he burnt some noodles, and then disabled it by cutting its wires.

He was also angered about what a police summary of facts described as a ‘‘perceived fraud regarding his inheritance from his father’’, which he confronted his mother about.

That resulted in a warning from police about his threatening manner, as well as being served a police safety order on May 22.

About 3.30pm on May 24 Meredith visited the Glenavy Hotel, where he told other patrons at the bar that he was ‘‘going to burn a house down tonight’’.

When he returned home, he collected a framed certificate, framed photo and a metal figurine before pouring an accelerant around the inside of the house, lit a rag doused in flammable glue and finally threw it inside.

By the time crews arrived at the blaze off State Highway 1 about 4.20pm, the house was engulfed and was eventually destroyed.

Meredith had left the scene on foot for the parking layby on the north side of the Waitaki River bridge and there called police and said he ‘‘just set fire to my mother’s house’’ and that ‘‘you had better come and arrest me’’.

Meredith, who had been in custody since his arrest, suffered from mental health issues and had smoked methamphetamine which combined with his anger over the alleged inheritance fraud, led to an ‘‘appalling situation,’’ Judge Maze said.

As his mental health had ‘‘improved significantly’’, she said it was appropriate the indicated sentence of 20 months’ imprisonment be converted to intensive supervision.

That also included judicial monitoring and if the sentence broke down, jail would be considered.