Brother and sister ready for the ring 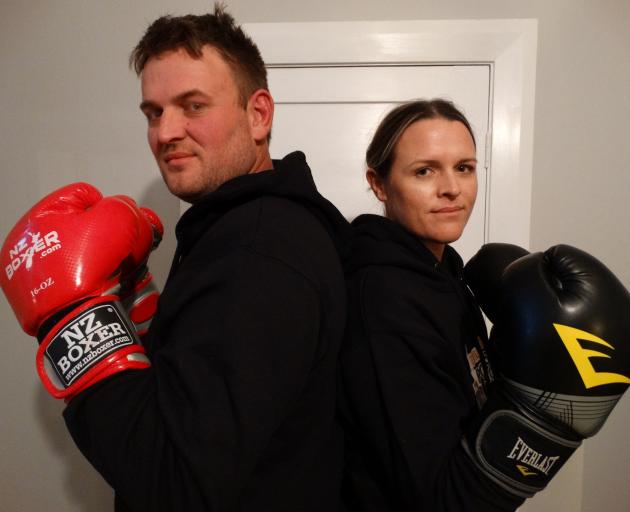 Photo: Daniel Birchfield
All siblings fight from time to time, but at the Portside Punch charity boxing event in Oamaru tonight, one pair will be cheering each other on.

Melissa "Lights Out" Smith (32) and Dylan "The Villain" Winter (30) are both on the 10-bout card for the event,  which is raising funds for the Hugh Adam Cancer Epidemiology Unit, Otago Community Hospice, and the Cancer Society.

Mrs Smith, a former Otago Rebels netball triallist, was one of about 45 initially approached to take part in a six-week boot camp before the final cut.

"My husband got on as well, actually, and we thought ‘that might be cool’, but we couldn’t both do it. I was a bit hesitant, because I think I’m a bit of a lover, not a fighter. My brother ... kind of pushed me into doing it. I thought the worst thing that will happen is ... if I don’t get through I’ll be nice and fit for netball."

After four months of training, she was confident she could bring the fight to her opponent, Erana "Double Shot" Smart, who plays netball with her for Maheno.

For Mr Winter, the event was all about "redemption".

He was set to take on Jason Millns at the first Portside Punch in 2014, but broke his leg and damaged ligaments playing rugby three weeks before the event.

They now have another chance.

"It was quite disappointing for Jason, especially because they couldn’t match him up with anyone else at the last minute. It’s a wee bit of redemption, so it’s quite exciting to finally get this over and done with."

He looked forward to seeing the other competitors in action — especially his sister, whom he picked to win her bout.

Mrs Smith felt the same about her brother’s chances.

"I’ll give Dylan the nod there."

Portside Punch is being staged at the former Te Pari Products building, in Humber St, from 6pm.