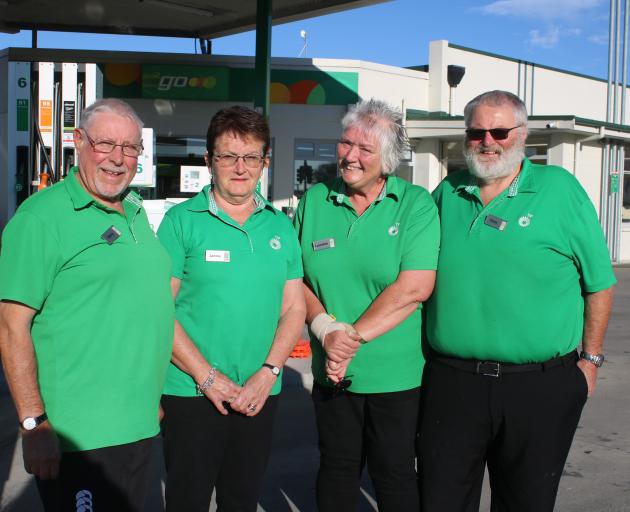 Marking 40 years of owning BP 2Go Oamaru are (from left) Stephen, Janice, Lorraine and Chris Rawson. PHOTO: KAYLA HODGE
One family has been fuelling Oamaru for more than 40 years.

They were ‘‘loud and proud’’ about their accomplishment, Chris said, sharing their success with his wife, Lorraine, and Stephen’s wife, Janice.

The two couples were recognised at a Business South event last week.

In 1982, Stephen was working as a mechanic at the BP station in Tees St.

The owner asked if Stephen would be interested in buying the station, and Chris, who was working at a bank, agreed to go into partnership with his brother.

When they bought it, Stephen was 28 and Chris was 23, and there were 22 different stations in Oamaru. Forty years later, there are just six.

Chris took care of the servicing side, learning to do oils and warrants of fitness, while Stephen was in the workshop.

In 1988, BP bought the Thames St station from Mobil, and leased it back to the community. The brothers took over in 1993, taking Hi-Way Auto Centre, now Hiway Autos, with them.

‘‘We could see the opportunity of coming out here,’’ Chris said.

Since then, the building has been through two rebuilds, and they went into partnership with Mike Corder at Hi-Way Auto Centre, before he bought them out and closed the Thames St garage in 2013.

Six of Chris and Stephen’s children have worked at the service station through the years, and the pair have employed many Oamaru school children.

‘‘The bit I like is watching everyone develop. It’s watching the high school kids and how they have to develop to talk to people — it’s communication,’’ Chris said.

There had been some major changes in the industry over the past 40 years, but one thing had stayed the same — the community support.

‘‘It’s the people you see all the time — it’s almost like a big family thing,’’ Chris laughed.

‘‘People come in and you have a bit of a yarn while you’re serving them, it’s not just take the money and thanks very much. Sometimes it’s a bit hard to get people out of the shop.’’

In return, the pair have given back to the community, sponsoring a lot of sports clubs and competitions, and they are both life members of the North Otago Rugby Supporters Club. In the ’90s, Stephen used to dress up as BP Bear and visit Oamaru schools for the BP Technology Challenge, now known as BP Challenge.

They thanked all of their staff over the past 40 years, and Stephen said their wives had been the ‘‘biggest part of it’’.

Stephen enjoyed the challenges and rewards of being in business with his brother and the pair ‘‘bounced off each other’’ well.

‘‘We’ve had discussions that we didn’t agree with but we worked through them,’’ Stephen said.

‘‘We’re very proud of what we’ve got — it’s a community-based service.’’

They listed the station for sale in 2020, and Ralph Davies took over as manager in October last year.