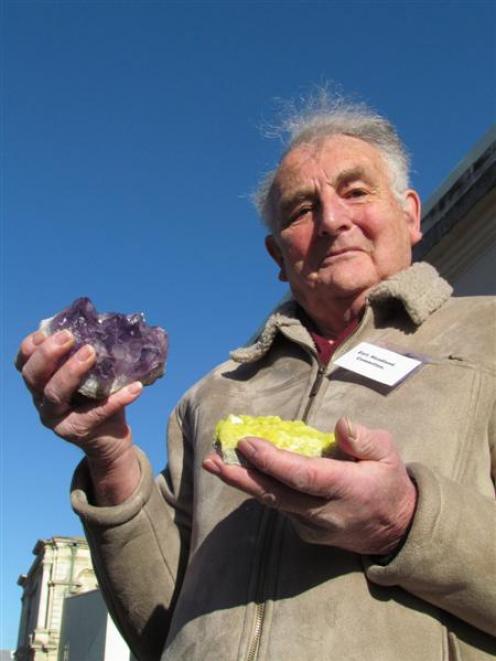 Earl Headland, of Oamaru, shows two examples of his extensive rock and mineral collection, some of which he had at the Oamaru Gemstone, Jewellery and Craft Fair in Oamaru at the weekend. Photo by David Bruce.
When he was 9 years old, Earl Headland was given a box of rocks by a friend of his father.

Now, 70 years later, he has about 12,000 rocks, and one room in his Oamaru house totally dedicated to his collection.

He had some of that collection, which has come from all around the world, on display at the North Otago Rock and Mineral Club's 44th Gemstone, Jewellery and Craft Fair at the weekend, joining 10 others who had come from as far away as Nelson and Invercargill.

Those he brought to show demonstrated the wide range of colours, shapes and sizes in his collection, which occupies seven big cabinets. He also has a huge collection of shells.

''I don't have any particular favourites. I'm just interested in rocks,'' he said.

He also has no interest in what his collection may be worth, or if anything is valuable.

''I'm not really interested in value, but fascinated by the colour and different shapes.''

He started his collection as a boy in England, but it really took off when he emigrated in 1966 to Australia, where rocks and mineral abounded.

Along with his son, he would head out into the outback to collect rocks, sometimes in utter isolation.

They particularly scouted around the old mining areas, where rocks could be picked up from the surface and the old mine waste stacks.

On one trip, they trekked about 12km through steep, rock country, dropping off water as they went. They then carried out 25kg of rocks each on a 7 hour trip, drinking the water they had placed.

At another site, a uranium mine, they took in an ultraviolet light so they could spot fluorescent rocks in the dark. When they switched it on, the whole ground lit up.

Then, he collected whatever was available, but he has since pruned his collection to the best pieces.

That also applies to anything he adds to the collection: ''Now, I only collect the best.''