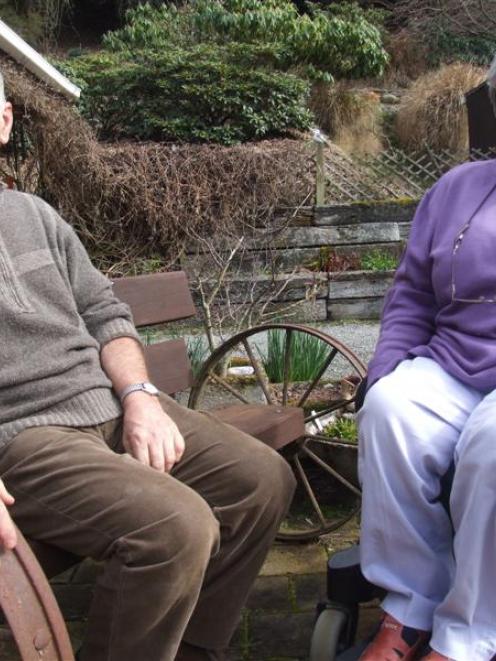 Dave and Trish Hill's lives are filled with challenges. Photo by Sally Rae.
Dave Hill knows all about coping with a disability. His wife, Trish, is New Zealand's most successful female wheelchair athlete, with 36 international medals and trophies, plus eight world records, and he has helped many other athletes with disabilities.

Now he is facing his own disabling challenge - dealing with the very rare brain disorder, superficial siderosis, as Sally Rae discovers.

It is ironic that a man who spent 20 years working with athletes with physical disabilities, including taking them to competitions around the world, is now more disabled than some he helped.

Mr Hill (56), who was diagnosed with superficial siderosis (SS) in 2004, was forced to give up his business after losing his balance, injuring himself and landing in hospital.

He has experienced many side effects associated with SS, including deafness, loss of balance and co-ordination, anosmia (loss of smell), ocular motor palsies and severe headaches and migraines.

People often asked if he was bitter, but he was more concerned about the future than the past, he said.

His wife communicates with him using a white board and sign language as he has been totally deaf for more than a year.

He went to Christchurch last week for a cochlear implant but there was a "huge chance" it would not work.

He would not know whether it was successful for about four months. Two previous implant operations on SS patients in New Zealand were failures.

A walking frame sits in the couple's home and Mr Hill's next move will be into an electric wheelchair - like his wife.

While he was "terrible on slopes and steps", it was being unable to hear that was the most frustrating, he said.

His neurologist believed there were possibly six or seven people with the disorder throughout New Zealand.

For Mr Hill the trigger was viral encephalitis - inflammation of the brain - in 1991.

He had been appointed chef de mission for the Paralympics in Barcelona and part of his job was to raise funds and educate New Zealanders about the Paralympics.

He organised a fundraising trip from Bluff to Kaitaia. During that trip, "someone breathed viral encephalitis", he said.

Doctors did not initially pick up what was wrong and problems continued for nearly five months, with double vision and poor hearing, before he saw a neurologist who confirmed he had suffered viral encephalitis.

He was aware as early as 1999 that his hearing was deteriorating but experienced a bad year in 2003, with severe hearing loss, a mini stroke, the start of balance problems and eye-to-body co-ordination difficulties.

For a year, he saw specialists before finally consulting Dunedin neurologist Dr Alan Wright, "who immediately knew what was wrong".

"I could tell by his facial expression he knew. It appears that during his time at the famous M.A. Clinic in America, he twice had dealt with this rare disease."

Dr Wright held his arm on a steep downwards angle and said: "From now on your life is going to be like this." "Boy, was he ever correct," Mr Hill said.

Mr Hill has set up a website - www.superficialsiderosis.wordpress.com - and now runs an international support group with 26 members.

He believes there could be three more sufferers not contacted in New Zealand and he would like to get in touch with them.

When he gets letters or emails from people wanting to join, they are "completely in the dark" about the disorder and how best to attack it, so he sends them information.

Often he has to deal with depression in SS sufferers and their partners.

He encourages people to tell their own story, which has been appreciated as it tells others what to possibly expect.

He also produced a questionnaire and the results had been "amazing" as it identified several new side effects. It was possible to get about 20 side effects - one he hoped never to get was dementia.

Working on the computer and keeping in contact with other SS sufferers had been marvellous as it kept his brain working, he said.

Often in his regular emails, he spends time on how to "feed the brain". Not only did that mean eating good food, but also giving the brain regular exercise. He also promotes activities like crosswords and Sudoku.

He finds the television programme Wheel of Fortune good "brain fodder", along with operating the support group. He often spends up to four hours a day replying to people and preparing newsletters.

Mr Hill was restoring a vintage racing car - a 1929 Auburn Special - when he was diagnosed with SS. The car will be auctioned later this month.

A mechanic by trade and self-confessed "Chev nut", his latest project is restoring a 1945 Chevrolet panel van, which he jokes will be his own personal hearse. It was slow work and he had to sit down to do it, but it was enjoyable, he said.

Mr and Mrs Hill are looking forward to the Paralympics in Beijing, which start today, and hope New Zealand's athletes can at least match their able-bodied colleagues. Between them, the couple have attended six Paralympic Games and 32 international competitions.

In her 13-year sporting career, Mrs Hill achieved eight world records in slalom, 200m, 1500m and 5000m track events. She was inducted into North Otago's Sports Hall of Fame in 1997.

The Hills have a picturesque home bordering the Waianakarua River, but they intend selling and building on a flat section.

Their faith had helped get them through the difficult times. They could not change their situation and had to carry on, Mrs Hill, a polio victim, said.

To anyone newly diagnosed with superficial siderosis, there was a "huge chance" they would experience a similar number of symptoms to him, Mr Hill said.

"My own experience is that the first year or so after diagnosis is not so bad, so if you are a young person, make the very best of this period. Live life like never before."

• Superficial siderosis survivors and their families are welcome to join the support group. Dave Hill can be contacted by email: sssurvivors@clear.net.nz or fax (03) 4395631.