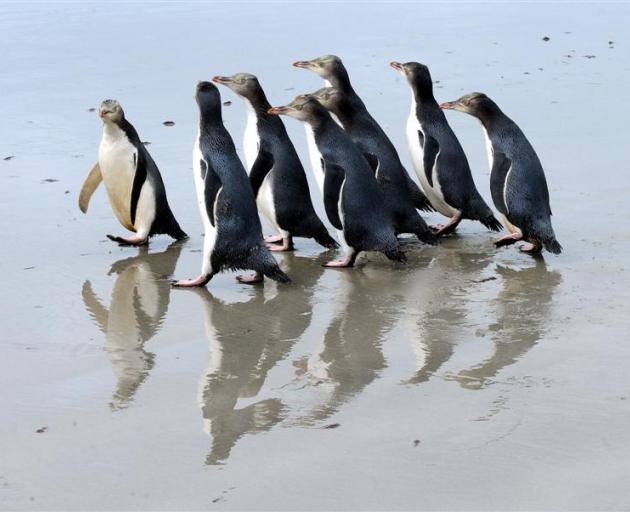 Yellow-eyed penguins are at threat from the avian diphtheria virus. Photo: ODT.
For the second year in a row, Moeraki’s yellow-eyed penguin colonies have suffered a "terrible" outbreak of the mysterious disease that could threaten the species in mainland New Zealand.

Penguin Rescue manager Rosalie Goldsworthy is asking for help for the endangered birds before it is too late. She has warned the species could die out in mainland New Zealand "before we do anything" about the avian diphtheria that has been plaguing penguin colonies since 1999.

In 2015-16, the birds at mainland New Zealand’s two largest yellow-eyed penguin colonies — at Katiki Point and nearby Okahau Point — suffered what was at the time the worst outbreak of avian diphtheria in 11 years at Moeraki. But this year was already shaping up to be worse, Mrs Goldsworthy said.

Last year, 46% of chicks required antibiotics — administered daily by hand for five days — after the outbreak of the disease that causes lesions in chicks’ mouths and makes eating and breathing difficult. And this year the percentage would likely prove to be higher.

In 2014, the Department of Conservation (Doc) and Ministry for Primary Industries (MPI) studied the disease in search of a cause and "hopefully a vaccine" for the disease but came away empty-handed.

Earlier this month Doc vet Kate McInnes told the Otago Daily Times while it was once believed the disease affected colonies every second year, that was no longer the case, but she said some believed the availability of food for the birds played a role.

"One of the things that we still suspect happens is if you have a really good year where there’s lots and lots of food around, we don’t see it as much. And if we have maybe a ‘less good’ year, it’s more likely to turn up, but that’s not really proven."

Those questions were not answered directly by the ministry but instead Investigation and Diagnostic Centre director Veronica Herrera said there were "a large number of environmental and other factors which could be significant in understanding this disease further".

"So far MPI has been involved in assisting with sample collection and testing for diseases exotic to New Zealand as well as the most likely viral and bacterial causes. This work has been important in understanding that it is more likely to be something other than a virus."

With 10 chicks at Moeraki still at their most vulnerable — less than 3 weeks old — and one chick still receiving antibiotics, the colony was not in the clear yet this year, Mrs Goldsworthy said.

She was only treating one penguin chick now and no new cases had been identified this week.

However, at this point in the breeding season the penguin chicks at Moeraki would — at best — record a 61% survival rate.

This year began promisingly and 85 chicks hatched from 47 breeding pairs, but now only 52 chicks survived.

Last year, 77 chicks hatched from 46 breeding pairs at Moeraki and — after the outbreak — only 55 chicks fledged, a 71% survival rate.

Since 2004, the disease had not been widespread at the colonies and typically only hit single chicks.

Mrs Goldsworthy said the good news was that 52 chicks had survived so far this year.

"Each one is doubly precious."

At Penguin Place, on Otago Peninsula, one death this year has been attributed to avian diphtheria. Dead chicks were sent to Palmerston North for autopsies.