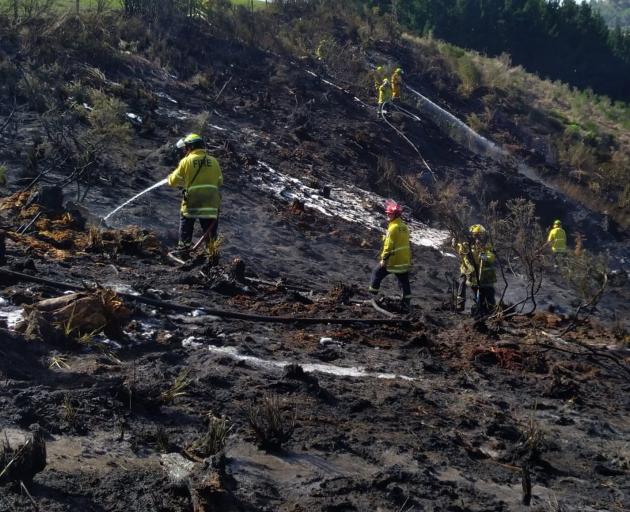 All helicopters were stood down at 5pm and a couple of fire crews remained on site to dampen hot spots. PHOTO: DANIEL BIRCHFIELD
An investigation has been launched into the cause of a large blaze that scorched grass and scrub on a rural property near Herbert in North Otago on Sunday.

While the fire was not thought to be suspicious, Fire and Emergency New Zealand Waitaki deputy principal fire officer Mike Harrison confirmed it was being investigated as the exact cause had yet to be established.

Multiple fire crews responded about 1.30pm after a report of a fire burning in grass on a rural property near a forestry block in Reid Rd.

At the fire’s height, four helicopters and nine appliances and crews from the Hampden, Weston and Kakanui Volunteer Fire Brigades and the Waitaki Voluntary Rural Fire Force worked to contain the blaze, which covered about 3 hectares.

All helicopters were stood down at 5pm and at least two fire crews remained on site to dampen hot spots on Sunday evening.

Mr Harrison said crews had to work fast when they arrived at the scene, as the blaze threatened nearby plantations.

"Hampden and Kakanui [crews] arrived to find quite a significant fire burning up a steep gully through scrub and grass, surrounded on two sides by pine trees. Those first responding forces did a great job in preventing it from entering those plantations.

"There was two blocks and they were both under threat. The crews managed to get in there through some pretty hard work."

The nature of the terrain, weather conditions and a lack of a reliable nearby water source had not helped the situation.

"The fire appears to have started at the bottom of the gully and spread up the side. Anytime you’ve got a steep slope like that the fire is going to travel a lot faster. Unfortunately, we had a northeasterly breeze which was pushing the fire from below as well.

"We were up against it in terms of weather conditions. We were just lucky the wind wasn’t too strong and that we were able to get enough resources there quickly enough to get it under control."

He advised people to err on the side of caution when it came to lighting fires.

"Even though we are in a restricted fire season and we have had a bit of rain recently, the ground conditions are still relatively dry which means if we do have fires they get away pretty fast."

It was not known when the investigation into the blaze would be completed.