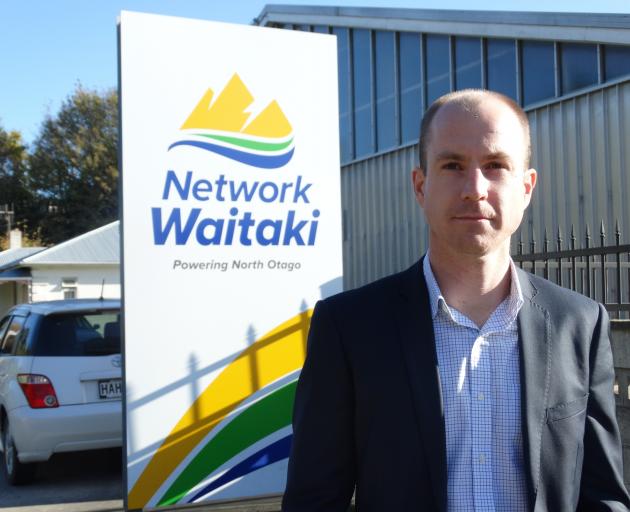 Network Waitaki chief executive Geoff Douch started in the role on April 1. PHOTO: DANIEL BIRCHFIELD
New Network Waitaki chief executive Geoff Douch says the electricity industry is arguably changing more rapidly that is has ever done before and believes the Oamaru-based company is in a good position to support its customers through that. Reporter Daniel Birchfield found out more.

After about six weeks in Oamaru, Geoff Douch is impressed with what he has seen, both in regards to the town itself and the consumer-owned Waitaki electricity distribution company he heads.

He was appointed chief executive in late January, replacing Graham Clark, who spent 42 years at the company, and started in the role on April 1.

The former Pukekohe-based Counties Power asset management general manager, who grew up in Wellington before moving to his family's kiwifruit orchard in Tauranga in his early teens, said despite a difference in size Network Waitaki and his former employer were actually quite similar.

However, there was one difference Mr Douch, who was educated at Otumoetai College, in Tauranga, before graduating from the University of Canterbury with a degree in electrical engineering, thought was key.

"I think Network Waitaki has possibly got a different sense of community. There is a lot of pride in the company.

"There's a lot of pride in Counties at Pukekohe too, but it was part of the mass of Auckland, whereas Oamaru and Network Waitaki ... there is a slightly different feel to it.

"It's a great little company.

"It does well for its size, in terms of electricity businesses, lines companies, in New Zealand.

"There are 29 of them and Network Waitaki is the fifth-smallest."

He said it also had the third-lowest lines charge in the country.

"Network Waitaki, for a little company, is punching above its weight."

Mr Douch said that needed to be more widely shared, as in the past the company preferred to fly under the radar as opposed to trumpeting its successes and the work it did in the community, which included pledging annual grants of $120,000 to sports and cultural groups, and other community organisations.

While the company was in good shape, the electricity industry was changing rapidly, he said.

"It's going through an interesting time. We're on the cusp of a whole lot of changes with technology. That technology means the electricity industry is going to have to change and adapt, probably more rapidly than it ever has before.

"What we are going to see now and what we are seeing in Europe and North America and other overseas areas is the different types of technology. People are putting solar on their rooftops, they're putting a storage battery in to capture that solar energy.

"They might use solar to charge their electric vehicle and drive around. People are using technology that changes how they use electricity."

While Mr Douch said while there would still be a need for lines companies, its traditional business of taking electricity from the national grid and supplying it to people's homes and businesses would change.

"We'll still do that, but there might be electricity coming back to the national grid from their home, or to their neighbour's home."

With that came challenges, he said, and the need for regulations to reflect them in the "most practical and efficient way without too much red tape".

"For example, if you have got a solar panel on the roof and you want to sell [electricity] to your neighbour, there has to be some quite clear regulations by which you can actually do that ... Right now, you can buy energy from a retailer. You could sell that back to a retailer if you produced it, but how do you sell it to a neighbour?"

"Do we own and install, supply and install or provide information? That's something we we just don't know yet."

When not pondering the future of the industry he has spent all of his professional career in, Mr Douch liked to focus on other things - namely cars.

"I'm into cars in a big way. I've got four cars. I've got a rally car and and old classic race car. I'm just as happy in overalls in a shed with old cars as I am in a suit in an office."