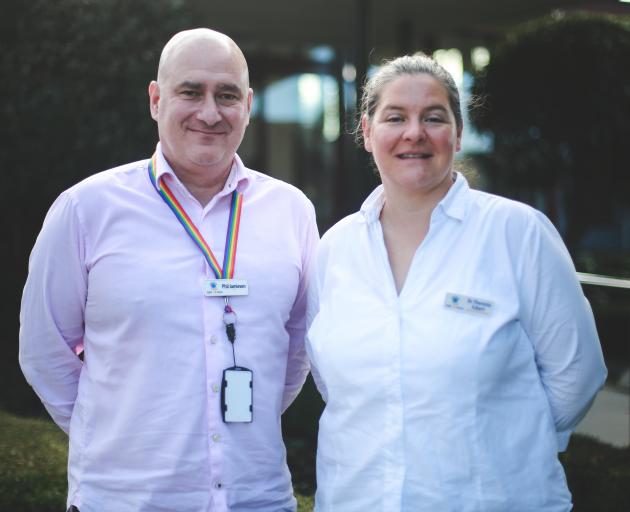 Waitaki District Health Services chief executive Phil Jamieson with one of the Oamaru Hospital’s 10 new permanent doctors, Dr Teresia Eckert. PHOTO: REBECCA RYAN
Sometimes you have to slow down to speed up.

After years of depending on locums to fill gaps, Oamaru Hospital now has 10 permanent doctors and no locum vacancies.

Waitaki District Health Services (WDHS) is also on track to get close to break-even position in the new financial year.

When chief executive Phil Jamieson started in the role in August last year, moving the company into a financially sustainable position and overcoming the continued dependence on locum staff were priorities.

"Not only [do locums] come at a financial cost, when you’ve got locums in and out it’s very difficult in terms of continuity of clinical practice."

It was important to address the hospital’s financial issues — as well as issues regarding community relations, and a mistrust of management — in a sustainable way, he said.

"We needed to slow down a little bit to speed up and build a sustainable organisation.

"We were probably pushing a little bit too hard in terms of addressing the financial lever — especially in the short term.

"So we slowed down our recruitment of doctors, to get the right people in the team."

While WDHS would operate at a deficit of about $900,000 to $1million in this financial year, it had made good clinical appointments and was on track to get close to a break-even position next year.

Covid-19 had made New Zealand a more attractive option for international doctors, and had helped Oamaru Hospital recruit its 8.5 FTE permanent doctor positions.

The new recruits are a mix of specialists in rural hospital medicine, emergency medicine and internal medicine.

"Once you build up a critical mass of good people, docs want to work with good people, so that’s helped our recruitment hugely."

Mr Jamieson also saw engagement with the community as "paramount", and the hospital had hosted an open day and other community forums.

"We’ve done a lot of work in terms of rebuilding engagement with the community."

The hospital had also made improvements to its patient feedback system, and recognised the importance of working in conjunction with other rural hospitals, such as Dunstan, Gore, Balclutha and, critically, Dunedin Public Hospital.

Issues raised in the first staff survey mostly concerned communication, management and a lack of support.

That drove the reintroduction of service leader roles, and admin staff were being reinstated with the teams they supported.

"We have revisited the past — and that’s OK," Mr Jamieson said.

"Sometimes a bold and a brave move is to say, ‘this doesn’t work, or hasn’t worked as well as we thought’."

Funding was always a challenge in healthcare.

"It’s the perennial issue for everyone; we’re not alone."

However, the hospital was in a much better position to engage in funding discussions now.

"You can’t jump up and down about funding when you haven’t got your costs, or your operations, under control."

The biggest unknown was the impact of the health and disability system reforms, Mr Jamieson said.

He saw benefits in consolidation, but said that needed to be balanced with localism.

"The thing I personally believe is, by making the centre stronger, you actually need to make the localities stronger and have a more powerful voice.

"The risk is, you wash out the individualism."

There was still work to be done, but Mr Jamieson was happy with how things were tracking in Oamaru.

"I think we’ve started the journey in terms of stabilising the ship," he said.

"I’m under no illusions that’s still a work in progress.