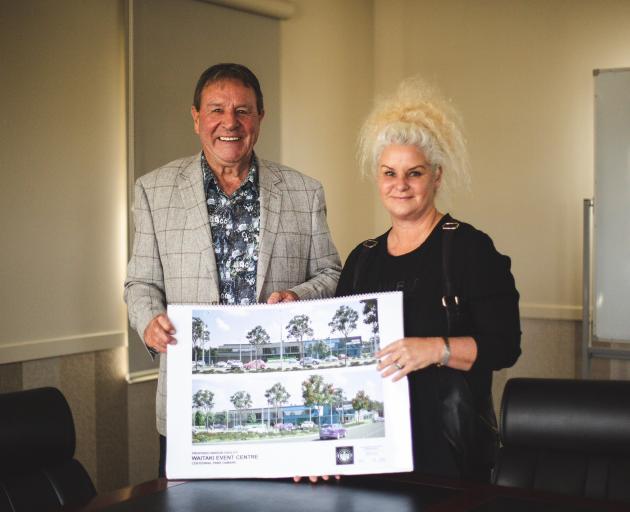 Covid-19 was the catalyst for them to make the pledge - the North Otago couple offering to match every dollar given to the project by local families and businesses, up to $5 million.

During last year’s lockdown, Mr Hurst said he felt "bombarded" by news predicting the collapse of businesses and mass unemployment.

So the Papakaio businessman, who is in the aged-care business and has previously appeared in New Zealand’s Rich List with his brother Ian, started thinking about how this "negative" could be turned into "a real positive".

While he could not solve the world’s problems, or New Zealand’s, he thought he could do something for North Otago.

"A project of this magnitude would be an excellent way of securing employment, supporting local business and, equally importantly, [would] provide all our residents with a sense of actually doing something positive, in these times of negativity, for our district," Mr Hurst said.

"North Otago has been an absolutely wonderful district to raise our family in and to run our businesses from.

A new charitable trust - the Waitaki Event Centre Trust - has been formed to drive the fundraising campaign for the $24million six-court stadium.

The Waitaki District Council has committed up to $10 million towards the project, and this week the Veterinary Centre Oamaru and LJ Hooker Oamaru announced their "significant" financial support.

Waitaki Event Centre Trust spokesman Kevin Malcolm would not disclose how much the Veterinary Centre and LJ Hooker had contributed, but said it gave the trust a "huge kick start" to match the Hursts’ $5 million.

Mr Malcolm said the Hursts’ pledge changed the project "from a dream to a reality".

"It’s showing the commitment of Doug and Donna to the Waitaki district and the value they place on everyone having the best opportunities."

Mr Malcolm was optimistic the $5 million could be matched - "plus more" - by November, which would keep the project on track for a 2024 opening.

Next month, a Givealittle page would be launched and a flyer delivered to households across the district outlining how businesses and families could contribute.

The trust had been talking to other potential local funders, and the response had been "really, really good", he said.

Mr Hurst said it was time for everyone in the Waitaki district to "come to the party" and create a "wonderful legacy for the community".

"Quite frankly, in my eyes, a group of 10-year-olds from a local primary school who decide to have a sausage sizzle which raises $50 for the project is equally important as an individual or business giving thousands of dollars."

The council is consulting the community over the proposed location of the centre at Centennial Park, between the grandstand and Taward St.