Farmer suggests cleaning out the culverts 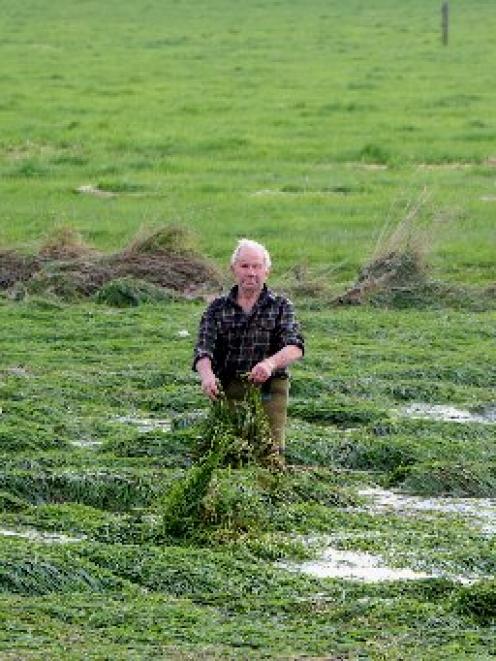 Mr Pile, who farms 400ha at McPherson Rd and Corbett Rd, said there were two areas where water was being blocked - on the eastern side of the railway, where gorse and bracken had overgrown, and a flood channel at Hilderthorpe, where grass was blocking water flow.

Poorly designed culverts at the intersection of Corbett Rd and SH1 had also added to the problem, he said.

A meeting with representatives from the Otago Regional Council was also being held next week to discuss, among other issues, flooding, regional development and roading, Mr Kircher said.

Mr Pile said the surface flooding at Hilderthorpe had become worse in recent years, citing the introduction of ORC policy requiring the exclusion of dairy cows from waterways as a contributing factor.

''The cows used to be able to go to the flood channel to graze, so now the water can't run because of the grass that's growing,'' he said.

''Each time it floods, the grass pulls up the sediment, gradually raising the level of the waterbed - it has got to be cleaned out.''

Frustration was mounting among many farmers, he said.

''We've got to be able to operate our business,'' he said.

''When we get all this rain, I can't get to [areas of] my farm, which has a return of more than $4 million a year. I have to be able to operate it.

''Now we get 50mm of rain and the road is blocked - it's a state highway of New Zealand; it's not just a secondary road. It's not acceptable.''

Mr Pile, who milks 1100 cows, said the problem could be rectified ''simply by cleaning the flood channel out and getting rid of the gorse by the railway''.

He said he would do the work himself if he was not restricted by consents.

''I've got a couple of diggers. I haven't got a problem with coming down and fixing it up, if I'm allowed to,'' he said.

Mr Kircher said some work had been done to prevent surface flooding in the Hilderthorpe area, but the council was not completely satisfied. It was important the region was not shut off from the rest of the country or restricted by policy in emergency situations.